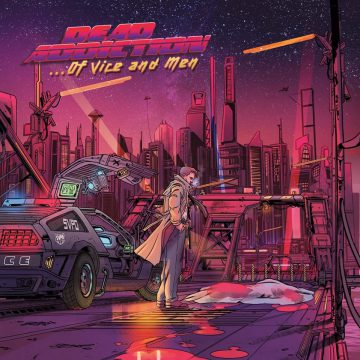 Belfast, Northern Ireland rockers Dead Addiction consisting of lead vocalist Joe Murphy, guitarists Chris Van Engelen and Ciaran Lyttle, bassist Danny Haughey and drummer Stephen Engelen have released a lyric video for their latest single titled “Blood Money” from their upcoming debut album …Of Vice & Men. There is still no release date as of yet for the band’s debut album.

The following message was posted in part on Dead Addiction‘s Facebook page back on April 25, 2020:

As promised! Here is the third single taken from our forthcoming album. This one has been a live favorite for a long time, it’s a track called ‘Blood Money’. Accompanied by a stellar lyric video by John Connor of Ravenlight and also featuring the awesome album artwork by John McFarlane.

This song tells the story of bribery and corruption that has taken hold of San Vector city, as our detective comes to terms with how things have changed.”