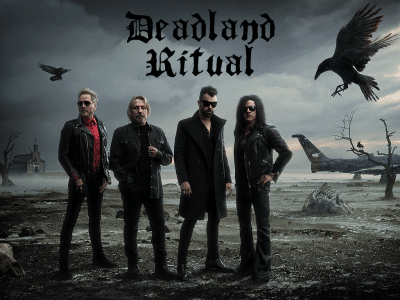 “Deadland Ritual is a band that spiritually was born in the desert where legendary drummer Matt Sorum lives these days. Drawing inspiration from the “ritual symbolism of the desert badlands” paired with his love of the idea of a “ritualistic forgotten space,” the name of the group felt appropriate for the darker tone of the music he was creating with iconic bassist Geezer Butler (Black Sabbath), guitarist Steve Stevens (Billy Idol) and lead singer Franky Perez (Apocalyptica, Scars on Broadway).

Longtime friendships with Stevens and Perez helped to form the initial core of the lineup, but Sorum says that it was a pivotal moment when Butler agreed to join in. “Black Sabbath was my first band that I really fell in love with as a musician,” he says. “That was my entry point when I started coming up as a young drummer.” The bassist’s unmistakable tone is an important part of the foundation of the band’s sound.

Calling himself “semi-retired,” Butler admits that there was a lot to think about when he got the invitation to join Deadland Ritual. “I had to get used to the idea of starting from scratch again, which is good. It’s a challenge for me,” he says. “But I really liked the music that I was hearing. It’s not your typical metal stuff or hard rock stuff or whatever.”

For Stevens, it was a revelation the first time he found himself recording with Butler. “I remember the first time that I started tracking against his bass, and I went, ‘Oh my God,’ he recalls. “There’s a lot of times in the studio as a guitar player, you get a guitar sound and you’re trying to make it work, you’re tweaking it. There was none of that bullshit. It just fit against his bass sound and it was really exciting for me. It was like, ‘Wow, I get to hear my guitar against a bass guitarist that I’ve loved since I was 15 years old.”

“This happened the way it was supposed to happen. We didn’t force it. The entire process has been so enjoyable. It’s reminded me of what it was like to be in a band when it mattered,” Perez adds. “Like, before you go to sleep, you’re thinking about the music. When you wake up, you’re thinking about the music. It’s been a long time since I’ve felt the excitement of being in a room with a band like I did when I was a kid.”

The group worked on songs together and enlisted producer Greg Fidelman (Metallica, Slipknot, Black Sabbath) when it was time to record. They made the decision to track the material at Henson Studios in Hollywood. “We knew we wanted to make the biggest sonic rock madness that we could come up with,” Sorum explains. “Greg was the right choice for that.”

“Down In Flames” thunders through the speakers, a driving hard rocker with lush vocal harmonies that at the core, still feels like the sound of four guys in a room jamming. But there are additional flourishes, like the pedal steel that Stevens adds to the mystical midsection and Sorum’s tribal drums, which spontaneously emerged as the band was working on basic tracks. “It was one of those beautiful mistakes.” Stevens says, recalling how the drummer began playing the pattern on the fly.

But make no mistake, as the songs developed, Sorum often had a definite vision. “It’s great because Matt really knows what he wants it to sound like and he just keeps going and going and going until he’s got it right, until he’s satisfied with his drumming,” Butler says. “It’s really good to play with somebody who’s that professional. He’s so knowledgeable about different drum styles and he’s also a fan of Bill Ward, Sabbath‘s original drummer so he likes that kind of swing part of it as well.”

Sorum has logged decades of time behind the kit playing with Guns N’ Roses, The Cult and Velvet Revolver, to name a few, adding his signature sound to countless rock radio hits that are played to this day. With this band, he wanted to take things to the next level. “For me it was like, ‘Man, I want to get the best drum sound I’ve ever gotten. I want to play the best I’ve played,’” Sorum says. “I think I’ve achieved that. I feel as a drummer I’ve morphed through a lot of decades of rock and roll.”

Deadland Ritual’s “secret weapon” is Perez, a versatile vocalist who shines on the songs that the band has recorded so far, and a talented voice that Sorum has long hoped to incorporate into the right project. The singer fortunately had the full support of his bandmates as he took on what could have been a difficult job. “They’ve always believed in what I did vocally and they’re like, ‘Dude, sing. Don’t hold back. Sing like it’s your last day on earth.’ And I did that. I felt that, and I went in there with something to prove. And not just for me, but for us as a whole. 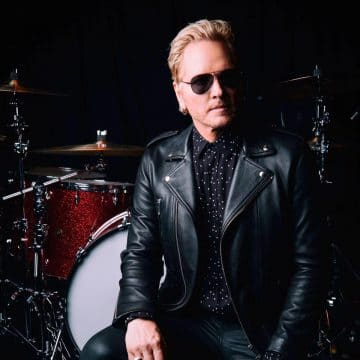 Similarly, Stevens put a lot of thought into his guitar approach. “I wanted what I brought to this band to be unique and exclusive to this project and that took a little bit of soul searching and brain power,” he explains. “I wanted my guitar to really compliment the other members and their individual styles. I truly feel that in this band that the sum is greater than the parts

Calling Stevens “an incredible guitarist,” Butler says, “He’s got some great ideas and he’s very inspirational. He’ll come up with stuff that I’d never even dreamed of coming up with, so it inspires you and like all with good guitarists, you want to come up to their level.

The ominously moody nature of “Broken and Bruised” and “Walking Into Walls,” two additional tracks that have recently been completed, reveal that there’s a lot of depth to the material that the group has been writing together. “Obviously we’ve all been through some stuff,” Perez says, “Life is full of ups and downs. So, if you’re being honest artistically, all of that turmoil, love, loss, happiness, and pain makes its way into the music. It’s a really cathartic experience performing these songs.

With a stack of festival appearances and headlining dates already booked, the members promise that the shows will be something special, mixing original material with deeper cuts from their collective past, ones that are “not the typical songs you would expect,” according to Sorum.

In addition to the larger gigs, the band will also get a chance to play some intimate venues. Butler says he’s looking forward to both scenarios. “You get to do the 20,000 seaters and you put on the show and you do get audience feedback, obviously, but I don’t know, there’s just something special about smaller venues. I might hate it after a week, I don’t know,” he chuckles. “It’s going to be different for me but I’m looking forward to playing clubs as well as the festivals.”

“I’m just really excited for people to see this band live,” Perez adds. “One of the things that I want to really emphasize is that this is an honest to God, down and dirty rock and roll band. We’re energized, and we want to put on an incredible show.”

No egos, no bullshit. Deadland Ritual is ready to take the world by storm. For Sorum, that means the 2018 equivalent of his teenage years when he was handing out handmade cassettes of his first recordings. Get the music out there where the fans can hear it and the rest will come. “Just release the material, he says. “We’re ready to play.””