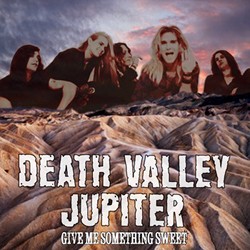 Death Valley Jupiter Release ‘Give Me Something Sweet’

Demon Doll Records and Death Valley Jupiter founding member Danny Knutson have teamed up to bring you an electric set of 18 highly charged rockers that burned a whole through the Sunset Strip from the late eighties to the early nineties and are now available on the CD entitled ‘Give Me Something Sweet’.

Death Valley Jupiter were a force to be reckoned with and were a staple at the world famous Cathouse in Hollywood — opening for such bands as Faster Pussycat, Stone Temple Pilots and White Zombie, as well as touring with Bang Tango for Riki Rachtman’s ‘Cathouse Wild West Tour’ throughout 1993.

Cranking out one radio anthem after another, one would be pressed to think Cheap Trick would have enjoyed having these guys pen a song or two for them! But in all actuality it was Motley Crue frontman Vince Neil who took a liking to the band first and bankrolled one of the band’s first recording sessions in order to secure them management and a record deal. Vince also hit the studio with the band to sing backup vocals on a track.

The ‘Give Me Something Sweet’ booklet contains a brief but full history of the band written by Danny himself that takes us through each time period and the different band members that were a part of Death Valley Jupiter including the addition of our good friend and epic guitar player Dave Zink from Blackboard Jungle (who plays lead guitar on a majority of the tracks on the disc).

Remembering back to the days, the band had a great buzz and were local favorites that worked their tail to the bone to deliver such great music. Take another journey back to the Sunset Strip and grab your copy of Death Valley Jupiter’s ‘Give Me Something Sweet’ today at demondollrecords.com/death_valley_jupiter.