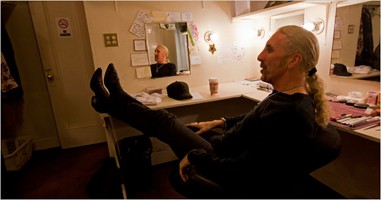 Paul Vitello of NYTimes.com reports: Twenty-five years ago, Dee Snider had the kind of success that most rock ‘n’ roll performers only dream of: million-selling records, sold-out concerts and an image bad enough to get him invited to testify before a Congressional committee investigating sex and violence on the nation’s airwaves. (He wore his incisor teeth sharpened to the hearing.)

But then Mr. Snider turned 30-something. His glam metal band, Twisted Sister, broke up. His record contract was canceled, his solo career tanked, and Mr. Snider learned one of the meanest lessons of stardom.

He was driving to work the other day, fighting traffic during his regular three-hour commute from eastern Long Island to the Brooks Atkinson Theater in Manhattan, where he has been appearing in a guest role in the musical “Rock of Ages,” a paean to the 1980s rock scene in which Mr. Snider made his name.

The part, which he is to fill until the end of this month, calls for Mr. Snider, now 55, to play the role of an aging rock impresario.

It is one of the more glamorous in a long string of jobs he has taken during his slow climb back from the bottom. Mr. Snider marks the low point as a stretch in the early 1990s when, he said, “I was answering phones in my brother’s business office during the day” and “putting fliers on windshields for my wife, Suzette’s, hairdressing business at night.”

Like many people who have looked into the abyss and decided not to go there, Mr. Snider has, in the process, become a student of survival — in his case, the survival of fading fame.

“When I was being Twisted, I just went full tilt, like I was racing to a finish line,” he said, navigating his 99,000-mile-old black Hummer on and off the westbound Long Island Expressway in search of open road, the Empire State Building appearing and disappearing in his windshield like a mirage.

“But when I got there, I realized there really is no finish line,” he said. “I have a life to live. For kids in rock ‘n’ roll, if you’re not Elton John or Billy Joel — which is most of us — that’s where you crash and burn.”

He muscled the Hummer onto Northern Boulevard, slipping through holes in traffic that, frankly, no one but a former heavy metal frontman who once sang “We ain’t gonna take it! You’re all worthless and weak!” would think to attempt.

“I just decided I wasn’t going to go away,” he said.

The standard punch line notwithstanding, there are lots of ways to get to Carnegie Hall (“practice, practice,” included), and Mr. Snider has tried them all. After his recording career ended, he discovered a talent for talk radio; wrote television scripts; produced and starred in a horror movie (“Strangeland”); lent his distinctive growl to various voice-over projects; briefly served as the somewhat menacing official voice of MSNBC; and, after years of effort, landed his own family reality TV show, “Growing Up Twisted,” which ran for six weeks last summer on A&E but was not renewed.

“It was by mutual agreement,” he said.

He has become, in other words, a kind of serial workaholic — and a living refutation of the imaginary rock ‘n’ roll reprobate who helped defenestrate a rock-hating dad in the 1984 music video for “We’re Not Gonna Take It.” It was one of MTV’s first smash hits, and helped raise demands for a parental-warning ratings system on all recordings. When Congress held hearings, Mr. Snider testified against the idea, appearing before a Senate committee without the dental caps he usually wore when off stage.

The man who pulled his Hummer into the parking lot across from the theater the other day remains proud to have been the writer of one of “the Filthy Fifteen,” a list of songs deemed most objectionable by a parents’ group during that time. He likes being liked by younger fellow cast members, and by the man on 47th Street who stopped in his tracks at the sight of him: “I know you!”

He likes being on stage, especially in a role that calls for his character to die and come back for the final scene — this does not spoil it, trust me — as a gargantuan angel of rock ‘n’ roll.

“When I first saw the show two years ago, I told myself, ‘I want that part,’ ” Mr. Snider said.

And voila — after just two years of waiting and networking and reminding his agent to call again — the part became his. At least for a while.

Courtesy of www.sleazeroxx.com and www.nytimes.com