Dee Snider — the man who wrote most of the Twisted Sister song repertoire — has surprisingly advised Gruemonkey.com in a recent interview that he has apparently not written a thing for his new upcoming solo album For The Love Of Metal, which will be released via Napalm Records on July 27, 2018. 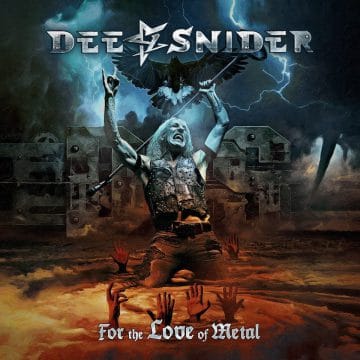 Snider stated (as transcribed by Blabbermouth with slight edits): “I’m not gonna bullshit you; I don’t bullshit anybody… I didn’t write a thing. [Producer and Hatebreed singer Jamey] Jasta, to his credit, he studied me like… I don’t know… like a fucking insect under a microscope, I guess… and he channeled me in such a way that… He studied my voice, he studied my lyrics, and everything he brought to me, it was like it came from me. But I did not write on this record. Yet everything that was presented to me, I felt inspired — I felt, ‘This works for me, it speaks to me, and I can sing it like it’s coming from my soul,’ and I mean it.”

Snider continued: “I’ll give you the ultimate example of how he was channeling me. During the recording of the record… When we started the record, my mother was healthy, 85, alive and vital — a contributing member of society, art teacher, [doing] charitable work — an amazing woman. During the recording, she was hit by a car, [suffered] brain damage, became a vegetable, [she spent] two months in the hospital and then died. And all while we were recording the record. And at one point, I’m recording a song… And I didn’t stop recording, because metal, for me, has always been that release of all those hardcore emotions — anger and frustration and sorrow; just all those things that needed to get out. I couldn’t stop, because I needed to express it through my music — through music in general: listening to it, playing it, singing it, rocking. So I’m singing a song called ‘I’m Ready’. And I’m singing a line, and all of sudden, I stop recording. And Jasta wasn’t in the studio that day; Nick Bellmore, who co-produced, was there. And the line I was singing was, ‘Death brings us sorrow no one can heal, love brings us memory no one can steal.’ And I said, ‘Did Jamey write that about my mom?’ And [Nick] goes, ‘Yeah, he did.’ And he had written a song for me about losing my mom that was so on the spot…”

You can read the rest of the portions of the transcribed interview at Blabbermouth or listen to the interview with Snider by Gruemonkey.com below:

This interview is associated with Gruemonkey.comCome join the horror/metal community! We got the chance to talk to metal legend Dee Snider! He was nice enoug…

Order “For The Love Of Metal” here: http://smarturl.it/ForTheLoveOfMetalOne of the most powerful voices in rock & heavy metal is back…and more ferocious th…