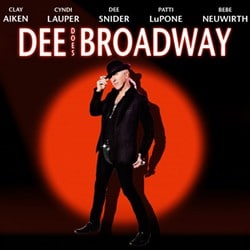 Dee Snider, the unmistakable front-man of the rock band Twisted Sister, will release his new studio album ‘Dee Does Broadway’ on May 8th through Razor & Tie Records — with the CD’s first single, “Cabaret”, now available for purchase at iTunes.

The album features Dee’s powerful voice and theatrical persona as he exudes his rock ‘n’ roll take on several Broadway classics. The new album will coincide with the release of his first ever autobiography, Shut Up and Give Me The Mic (Gallery Books), on May 8th.

Dee Does Broadway features several special guest stars, including Broadway and television icon Bebe Neuwirth on the Damn Yankees song “Whatever Lola Wants,” Broadway legend Patti LuPone on a West Side Story Medley “Tonight/Somewhere,” pop icon Cyndi Lauper on Sweet Charity’s “Big Spender,” Clay Aiken of American Idol on the Guys and Dolls classic “Luck Be a Lady Tonight,” the stars of the Broadway hit musical Priscilla Queen of the Desert (Will Swenson, Tony Sheldon, and Nick Adams) on South Pacific’s “There Is Nothin’ Like A Dame,” Mark Wood of the Trans-Siberian Orchestra playing violin on the Phantom of the Opera ballad “Music Of The Night,” as well a special rendition of “The Joint Is Jumpin” from Ain’t Misbehavin’ with Dee’s oldest son, Jesse Blaze Snider. Songs are also featured from classic Broadway shows including Cabaret, Chicago, The Threepenny Opera, Anything Goes, and Sweeney Todd.

Dee Snider is an American singer-songwriter, screenwriter, radio personality, and actor. Snider is most famous for his role as the frontman of the heavy metal band Twisted Sister.