Twisted Sister’s frontman Dee Snider has recently released “To Hell And Back”, which is his first song released in over two decades. The song is available as a free download at www.deesnider.com.

Snider states: “”To Hell and Back” represents my first truly new, original musical offering since the 90’s. When my friend and co-writer, guitarist Nick Perri presented me with the riff and music bed for this song, I found true inspiration to write for the first time in decades. Lyrically, the song raises a bold middle finger to those who whine and complain about the difficulties of life, but have no real clue what difficult is. As I say in the song, “Don’t tell me your sad story. Don’t say your world is black. Just spare me your vainglory. I’ve been to hell and back!””. 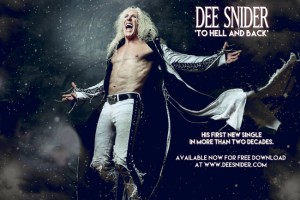 Snider is best known as the lead vocalist for Twisted Sister who went on to reach multi-platinum success with 1984’s ‘Stay Hungry’s record. Following his departure from Twisted Sister in 1987, Snider went on to form and play in Desperado and then Widowmaker. Snider had previously released two solo studio albums under his name, the first one being ‘Never Let The Bastards Wear You Down’ in 2000 and the second one being ‘Dee Does Broadway’ in 2012.