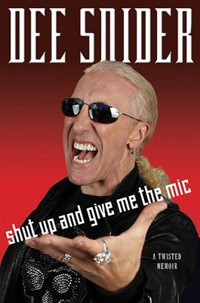 A day after Little Ceasar vocalist Ron Young said Axl Rose “doesn’t deserve to have the honor of induction”, Twisted Sister star Dee Snider has also slammed the Guns N’ Roses frontman for snubbing his Rock & Roll Hall of Fame induction, insisting that the singer is “screwed up”.

Rose has written to officials at the Hall of Fame declining the induction and revealing he won’t be attending Saturday’s gala in Cleveland, Ohio – and his stand has annoyed rocker-turned-radio host and TV personality Snider.

Interviewing Rose’s former bandmate Slash at the Revolver Golden Gods awards in Los Angeles on Wednesday, the “We’re Not Gonna Take It” singer said, “Someone just told me that it’s official Axl is not gonna sing at the Rock And Roll Hall Of Fame, and I said it’s crap. I said, if he can’t put this stuff aside for an event like that, for a recognition like that, to do the cool thing, and just in respect of what you guys have done, I think it’s totally screwed up.”

Slash refused to comment on Rose’s decision not to attend the Hall of Fame ceremony, but added, “I’ll be there.”

In his letter to officials at the museum, Rose stated that his decision was “personal” and added that the induction honor had left him in an awkward position.

He wrote, “This letter is to help clarify things from my and my camp’s perspective. Neither is meant to offend, attack or condemn… Since the announcement of the nomination we’ve actively sought out a solution to what, with all things considered, appears to be a no win, at least for me, ‘damned if I do, damned if I don’t’ scenario all the way around.”

“I strongly request that I not be inducted in absentia and please know that no one is authorized nor may anyone be permitted to accept any induction for me or speak on my behalf,” Rose continued.” Neither former members, label representatives nor the Rock and Roll Hall of Fame should imply whether directly, indirectly or by omission that I am included in any purported induction of Guns N’ Roses.”

Slash, Duff McKagan, Steven Adler and Matt Sorum are expected to take the stage after Green Day inducts Guns N’ Roses into the Hall of Fame on Saturday night.

The class of 2012 inductees also includes the Red Hot Chili Peppers, Beastie Boys, The Faces and The Small Faces, Laura Nyro and Donovan.

Dee Snider, the unmistakable front-man of the rock band Twisted Sister, will release his new studio album ‘Dee Does Broadway’ on May 8th through Razor & Tie Records. The album features Dee’s powerful voice and theatrical persona as he exudes his rock ‘n’ roll take on several Broadway classics. The new album will coincide with the release of his first ever autobiography, Shut Up and Give Me The Mic (Gallery Books), on May 8th.