Twisted Sister frontman Dee Snider was recently interviewed by Jimmy Kay and Alan Dixon for Canada’s The Metal Voice. The singer is promoting his upcoming new live CD/DVD For The Love of Metal Live, which will be released via Napalm Records on July 31, 2020. 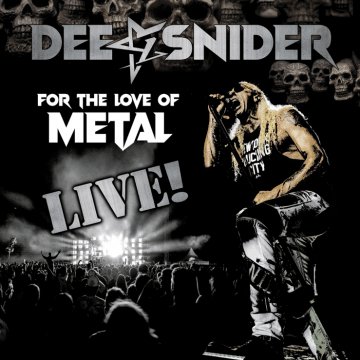 In terms of the bonus studio track “Prove Me Wrong” that will be on For The Love of Metal Live, Snider indicated (as transcribed by The Metal Voice with slight edits): “In this day and age, everybody is trying to sweeten the package to get people to try and buy the product. So they (the record company) asked if we had an outtakes from the album For The Love of Metal and we did not. So I said we can write something and record. So “Prove Me Wrong” is a single to people that this is Dee Snider‘s sound now. This is the direction I am in and staying in. It is very much in the vain of ‘For The Love Of Metal‘ (album) and anything you hear from me moving forward will be that heavy.”

With respect to the revamp of some of the Twisted Sister classics on the upcoming love album, Snider stated: “Twisted Sister was a metal band before we became recognized as this anthem pop metal hair band. We were in the trenches in Europe touring with Mötorhead, Saxon [and] Iron Maiden. There was no hair metal. There wasn’t anybody else was wearing makeup. We were a metal band but I had this love of AC/DC / Slade kind of anthemic rock songs. But in our heart, we were a metal band, especially in my heart. On this new live album, the older songs are metal but now more metalized after my new band lays into them. I really wanted to connect the dots for people. Here is what I am doing today, here is what I was doing then and they are not so far removed.

Twisted Sister was a glitter band which was formed in 1973. That is the Alice Cooper days, David Bowie days, T-Rex, New York Dolls and that was their inspiration. I joined in 1976 when that glitter era was over and metal was starting to come a thing and I loved glitter rock but I also loved metal. So when I joined, I brought in my love for both those things and that is what became Twisted Sister and defined as hair metal sound. But at my core and at my heart, I’m a metalhead. I have always been from day one. Day one first Black Sabbath album, day one first Grand Funk album, day one first Led Zeppelin album and so on… I was there at the birth of heavy metal and the death of the Woodstock nation and I helped swing a sledgehammer to destroy it.”

You can listen to the interview with Dee Snider by Jimmy Kay and Alan Dixon for The Metal Voice below: