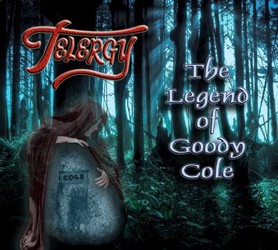 Twisted Sister frontman Dee Snider is just one of the guests appearing on Telergy’s upcoming progressive rock album ‘The Legend Of Goody Cole’. No release date has been set, but the album is available for pre-order at www.indiegogo.com/projects/telergy-the-legend-of-goody-cole-album.

Composer, producer, and multi-instrumentalist Robert McClung formed Telergy in 2009 with the goal of bringing amazing musicians from all over the world together to tell the stories behind historical events through a wild blend of progressive rock, classical, jazz and world music. The project’s first album ‘The Exodus’ was released in 2011 to world wide acclaim and featured many incredible musicians from a wide range of genres. The album won the hearts of fans and critics around the globe, and soon numerous notable musicians from all over the progressive rock world and beyond were on board to be involved with the next Telergy album, ‘The Legend Of Goody Cole’.

‘The Legend Of Goody Cole’ tells the true story of Eunice “Goody” Cole, who was convicted of witchcraft in the small New England town of Hampton, New Hampshire in the year 1656. After serving the better part of fifteen years in a Boston Jail, Eunice returned to Hampton to find that her husband had died and the town had seized their forty acre farm. Frail and elderly, she was given a small shack on the marshland outside of town to live out her final days. Upon her death she was hurriedly buried in a shallow, unmarked grave, with a stake through her heart to keep the evil spirits from escaping. Her ghost has been reported to wander the town at night searching for her grave stone.

This captivating tale is brought to life through the powerful, lush, energy filled music that Telergy creates, and transports the listener on a journey they will never forget. Telergy is a completely independent project that recieves no support from a major record label. Crowd funding through www.indiegogo.com/projects/telergy-the-legend-of-goody-cole-album is the only way to cover the large costs of mastering and duplication. A portion of the profits from this album will be donated to the Hampton New Hampshire Historical Society in an effort to update and restore Goody Cole’s currently unmarked memorial stone.

Hear sound clips and find out more at www.telergymusic.com.