Twisted Sister‘s long-time and outspoken frontman Dee Snider will be releasing a new solo album entitled We Are The Ones via Red River Records on October 28, 2016. 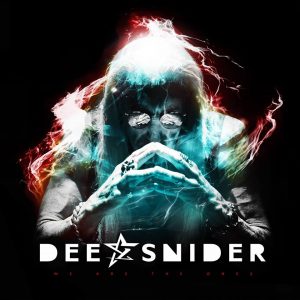 “…Legendary Twisted Sister frontman Dee Snider will officially release his vibrant new solo album, We Are The Ones, on October 28 on Red River Records (Distributed by BFD/RED).

Not wanting to waste any time in getting his legions of fans excited about We Are The Ones, Dee has launched a PledgeMusic campaign that offers a wide selection of exclusive items, as well as a discounted digital download of the full album upon the release date, including signed drumheads, lyric sheets, guitars, guitar pedals, a signed microphone, and even signed and numbered Dee Snider Legos. Also, a very special dinner with Snider and producer Damon Ranger that includes an early listen of the new album, and having Snider record a fan’s choice of an outgoing voicemail message, “Happy Birthday” or other personalized message as a MP4 digital file. The grand incentive is a full band private performance anywhere in the U.S. All pre-orders come with the AccessPass, which will give fans exclusive artist updates and a behind-the scenes look at the making of the record. To pre-order the record, please visit: www.pledgemusic.com/projects/deesnider.

Produced by Grammy®, Emmy® and Oscar® winning songwriter, Damon Ranger, We Are The Ones crackles with modern energy, from the call-to-arms manifesto of “Rule the World,” to the anthemic bonding of “So What” (complete with, yes, a string section) to the intensely synth driven “Close to You,” to the thematically soaring “Superhero” (a song tailor-made for running over the end credits of the next Marvel or DC movie blockbuster if ever there was one). Another significant highlight of the album is a newly re-recorded acoustic version of “We’re Not Gonna Take It” which has also been tapped the official anthem for The Recording Academy’s advocacy efforts, including the “Fair Play Fair Pay” Act. Recently performed in Washington D.C. at the annual Grammys On The Hill event, a video of the song can be viewed at Grammy.com/FairPlayFairPay [or below].

Also featured on We Are The Ones is an explosive cover of Nine Inch Nails’ “Head Like A Hole.” “I always thought it was a great song, a powerful song,” Snider explains, “I can’t wait to do that one live. Like ‘We’re Not Gonna Take It’ is iconic, ‘Head Like a Hole’ is iconic for that era.”

Dee Snider is currently working on a fall tour, which will be announced in the coming weeks…”