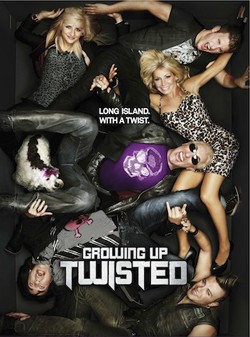 What happens when Dee Snider, the legendary front man of heavy metal group “Twisted Sister,” is the “quiet one” in the family? “Growing Up Twisted” follows the outrageous and oddball daily pursuits of the Sniders, who think their zany world is just real life, perfectly normal… only it’s not. The seven episode series premieres with two back-to-back half hour episodeson Tuesday, July 27 at 10 PM and 10:30 PM ET/PT.

“Growing Up Twisted” explores suburban life in Long Island through the eyes of an off-beat but tight-knit family of six who are fiercely independent, strong willed and unafraid to speak their minds. There is Dee, a loving husband, father and newly minted grandfather who is the legendary front man of heavy metal group “Twisted Sister,” the host of the “House of Hair” radio show and the national spokesperson for the March of Dimes Bikers for Babies; his hot and feisty wife Suzette, a clothing designer and makeup artist and the glue that holds the family together, and their children: Jesse, 27, an aspiring rock musician, husband and new father; Shane, 22, the resident comic; Cody, 20, a budding filmmaker; and Cheyenne, 13, daddy’s little girl, who is making the tough transition to teenager.

The series looks at the unpredictable daily life of the Snider clan including: a baptism where a song opens up wounds between father and son; a playful sparring match that has devastating consequences; the inappropriate behavior of a local store clerk that brings the Snider men together in a show of solidarity; and a concert where Dee performs with his offspring. Throughout it all, despite their craziness, the Sniders prove the love that binds them, no matter how twisted, is undeniable.