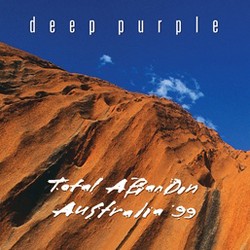 Recorded on April 20, 1999 at Melbourne Park, the 12-song 76-minute blockbuster, until now, was only available domestically as a DVD in the 2008 ‘Around The World Live’ boxed set (also released by Eagle Rock Entertainment). ‘Total Abandon’ is a major boon for Deep Purple fans as it musically traverses decades of material mostly from the ’70s and the ’90s. Lead guitarist Steve Morse, at this point in the band’s glorious career, had fully integrated himself into the mix, positively shining on songs from both eras.

The line-up of vocalist Ian Gillan, bassist Roger Glover, keyboardist Jon Lord, drummer Ian Paice and guitarist Morse is in rare form. The almost nine-minute-each jam-happy versions of “Pictures Of Home” and “Smoke On The Water” are just two highlights of many. Besides favorites like “Black Night”, “Smoke On The Water” and “Highway Star” the band reached into its enormous catalog for an incredibly satisfying evening that included opener “Ted The Mechanic” and “Sometimes I Feel Like Screaming” both off guitarist Morse’s album debut with the band, ‘Purpendicular’, in 1996.

Touring in support of 1998’s ‘Abandon’ album, the “A Band On World Tour” had Deep Purple criss-crossing the globe like the true road warriors they remain today.