Many Sleaze Roxx readers will know Danny Vaughn as the frontman for Tyketto and/or Waysted but the singer has also performed for a number of years as part of The Eagles tribute band The Ultimate Eagles. This time, Vaughn along with his 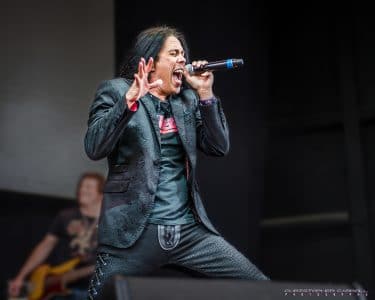 Tyketto bandmate / keyboardist Ged Rylands have joined forces with Deeper Purple for a cover of the Free classic “Wishing Well.”

The following message was posted by Tyketto frontman Danny Vaughn on the Tyketto (the fan page) Facebook page earlier today (with slight edits):

“You know how lead singers like to use fans and wind machines to blow their hair around on stage and give them the best “beauty shots”? I just raised the bar on that!!

My good friends in Deeper Purple have done it again! We decided to do the great Free classic “Wishing Well” this time. Always a little daunting singing on anything that Paul Rodgers has made his mark upon.

Deeper Purple are: Rob Sas on guitars, Phil Crombie on bass, Paul Morris on keys. Also featuring Ross Elder on drums and this song features 2 members of Tyketto, myself on lead vocals and Ged Rylands on keyboards.

Special thanks to Phil Crombie for mixing and mastering the audio as well as editing the video for ya!