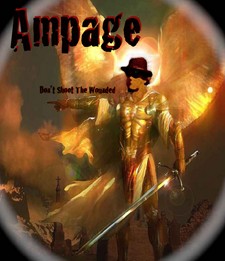 California based hard rockers Ampage have just released their 6th album ‘Don’t Shoot The Wounded’ that includes an appearance by Def Leppard drummer Rick Allen. The new CD is available for purchase and preview at www.cdbaby.com/cd/ampage2.

Vocalist Mark Mason is the founding force of the band, and is also a prolific songwriter with many credits ranging from television, to major movies such as: “I’m Dangerous Tonight” in 1990, “Bikini Summer II” in 1992, in which Jeff Conaway also starred and directed along with on screen performances by Mark and Ampage. Mark’s songwriting talents were also featured in the in the 1994 NBC Movie of the Week Robin Cook’s “Mortal Fear”. In 1999, Mark along with Rick Allen, wrote and recorded the theme song for the Disney Movie “Brink”.

To add to Mark’s impressive list of professional credits, he is also recognized for his work collaborating with other musical greats such as Tommy Shaw of the legendary rock band Styx, and with songwriter Wes Arkin of Guns N’ Roses fame, to name just a few of Mark’s many credits throughout his illustrious long term professional career as a songwriter and musical performer. The remarkable versatility, total pro creative adaptability and high quality of Mark’s style of songwriting and vocal and bass musicianship has earned him wide recognition amongst many of the music and movie industry’s elite as being a “musician’s musician”.

When Mark isn’t on stage you will probably find him swimming, biking, and running. He trains between 2-4 hours a day in between band rehearsals, recording and concert dates. Mark has competed in Triathlons and Ironmans all over the world.