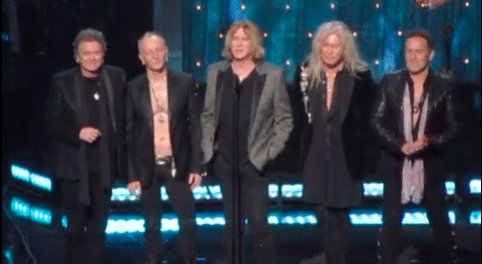 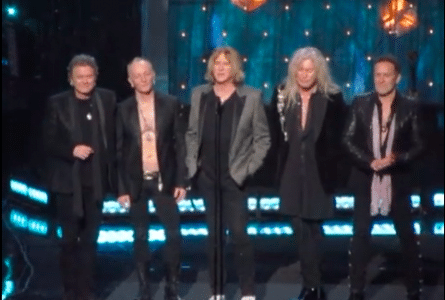 Elliott spoke on behalf of the band and stated in part with respect to Willis and Clark (as transcribed by Sleaze Roxx):

“Another significant moment in this band’s birth was a simple act of missing a bus, which is something that I did on one August 1977. By deciding to walk home instead of waiting for the next one, it would happen that I would bump into a young kid who I knew to be a pretty good guitar player. That kid is a guy called Pete Willis. Pete was a co-pilot in this band and one of the best [inaudible] in the business. Sadly, Pete could not be with us tonight but I want to emphasize how very important Pete was to this band in the early ’80s. Pete is a terrific player. He had a very mischievous sense of humour but he brought plenty of great musical ideas to this band.

And it was Pete after a chance meeting in a college cantine, both reaching for the same guitar magazine, introduced to the late great Steve Clark. Over the following ten years, Steve made a massive musical contribution to this band. His incredible and unique riffs helped shape some of the most [inaudible] songs that we will ever write. It really does go without saying that we love him and we miss him every day.”

Video of Def Leppard‘s acceptance speech at their induction into Rock and Roll Hall of Fame on March 29, 2019:

Def Leppard performing “Hysteria” at Rock and Roll Hall of Fame on March 29, 2019:

Def Leppard performing “All The Young Dudes” with Queen guitarist Brian May and others at Rock and Roll Hall of Fame on March 29, 2019:

All the Young Dudes, Def Leppard & Brian May & Ian Hunter (of Mott the Hoople) & The Zombies & Susanna Hoffs (of The Bangles) & Little Steven Van Zandt, Barc…