Def Leppard guitarist Phil Collen continues to branch out from the hard rock genre as he is scheduled to perform with the Queen of Funk Chaka Khan at the upcoming Black Girls Rock Fundraiser Live Stream on June 18, 2021. 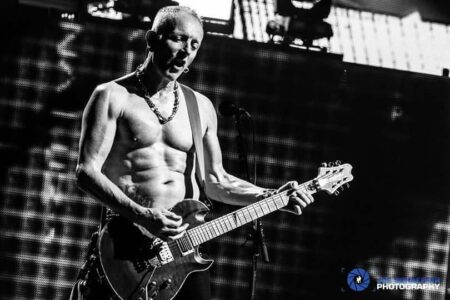 Wikipedia summarizes Chaka Khan‘s music career as follows (with slight edits): “Yvette Marie Stevens (born March 23, 1953), better known by her stage name Chaka Khan, is an American musician, singer and songwriter. Her career has spanned nearly five decades, beginning in the 1970s as the lead vocalist of the funk band Rufus. Known as the “Queen of Funk“, Khan was the first R&B artist to have a crossover hit featuring a rapper, with “I Feel for You” in 1984. Khan has won ten Grammy Awards and has sold an estimated 70 million records worldwide.

With Rufus, she achieved four gold singles, four gold albums, and two platinum albums. In the course of her solo career, Khan achieved three gold singles, three gold albums, and one platinum album with “I Feel for You.” She has collaborated with Ry Cooder, Robert Palmer, Ray Charles, Quincy Jones, Guru, Chicago, De La Soul, Mary J. Blige, among others. In December 2016, Billboard magazine ranked her as the 65th most successful dance artist of all time. She was ranked at No. 17 in VH1‘s original list of the 100 Greatest Women of Rock & Roll. She has been nominated for induction into the Rock and Roll Hall of Fame three times as a solo artist and four times as a member of Rufus featuring Chaka Khan; the first time in 2012 as a member of Rufus.”