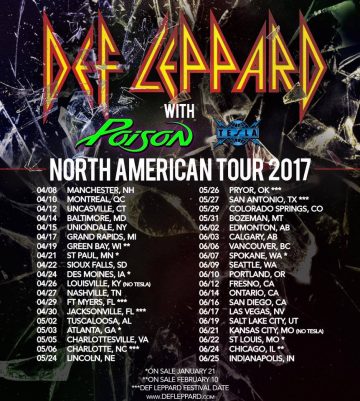 Multi-platinum album selling rockers Def Leppard have released a video of their live rendition of their 1981 hit “Bringin’ On The Heartbreak” in anticipation of the release of their DVD/2CD And There Will Be A Next Time… Live In Detroit, which will be released on February 10, 2017.

The footage was shot in HD. It obviously it looks stunning. Excellent stage show and lighting, impressive LED screens — the whole ball of wax. Def Leppard aren’t reinventing the wheel. There’s nothing ‘ground breaking’ on And There Will Be A Next Time… Live From Detroit but it is a fun performance to watch. Def Leppard ‘do their thing’ even if it is predictable and contrived.”

Def Leppard have recently announced that they will be hitting the road again touring in North America with Tesla as one of the opening acts for the third straight summer and Poison as the other opening band.