Elliott was recently interviewed by RollingStone for the occasion and was asked how he feels about the upcoming induction. Elliott advised: “It’s one of those situations that’s been on the back burner for a couple of months because once we actually got nominated we were like, “OK, cool. That’s stage one.” I talked about it a lot with some media people in October/November and I said, “We’re not going to get overly excited until, if, we are inducted properly.” Then we saw what the fan vote was doing. We aware that people around the planet were watching it on a daily basis. We were being informed daily how we were nudging ahead of Stevie [Nicks] and then there were comments like, “Do you know that every winner of the fan poll over the past six years has been inducted?” We were, “OK, cool. That’s interesting to know.”

Then we finally find out we’re in. Now we can stop holding our breath and go, “Great! How wonderful to be in the same club as the Rolling Stones and the Beatles and the Who and Queen and etc., etc.” It’s nice. It’s a good club to be in.”

In regard to whether original Def Leppard guitarist Pete Willis will be coming, Elliott indicated: “Yeah. Pete is invited. Absolutely. Whether he comes or not is up to him. We might have to drag him there by his hair. But he deserves to be inducted since he was involved in the first three albums. A lot of people aren’t aware that he did play until halfway through Pyromania. He contributed as much as anybody on the first two albums. Of course he deserves to get in. I haven’t seen Pete in 14 years. I don’t know if he’s aware yet. We’re going to reach out to him over the next day or two now that the dust has settled and we’ll see if he wants to come.” 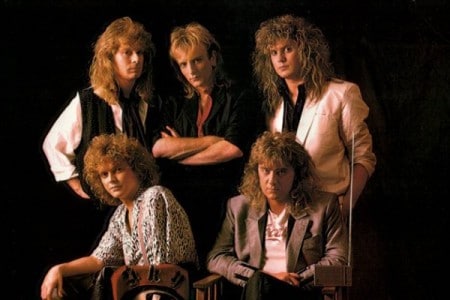 In terms of playing with Willis on the big night, Elliott stated: “I haven’t thought about that, but I don’t think we’ll be playing anything from that far back. But being there is part of the thing. Pete has kind of moved away from this kind of stuff, so he might just be a little reluctant to come along. The truth is that it’s obviously right that he gets in and he gets his statute, or however it works, but the success of the band was mostly to do with everyone else. I think that anybody would rightly say that the reason we got nominated is more likely to be because of the work we did after Pete left.

He helped us lay the groundwork for what was to come, but the success of the band was more with Phil [Collen] and Steve [Clark] and then with Vivian [Campbell]. It’s like a rocket that goes to the moon. The bit that gets ejected two minutes into the flight is still an important part when it sets off. It’s just not that important when it gets into orbit. Pete is kind of that guy I suppose. He was an integral part of the band when we started off, but we went our different ways. It became clear that we couldn’t go any further with him in 1982. We had four years together, but we’ve been together for 40. There are 36 other years in this band that he had nothing to do with. Playing with him might be a bit weird, but I don’t see why he couldn’t come if he wants to. He’s totally welcome.”

You can read the rest of the interview with Joe Elliott at RollingStone.