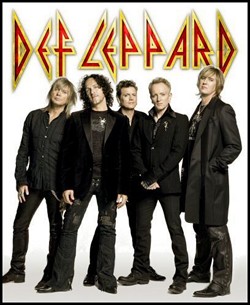 Def Leppard To Release ‘Mirrorball’ On Frontiers Records In Europe

Frontiers Records is pleased to announce the signing of DEF LEPPARD for the release of the upcoming live album ‘Mirrorball’ on June 17th in Germany, Austria and Switzerland, June 20th in the rest of Europe and June 23rd in France.

‘Mirrorball’ is Def Leppard’s first ever live album. The group’s spectacular live shows, filled with powerful melodic rock anthems, have become synonymous with their name, leading Def Leppard to be heralded as an institution in both the music and touring industry. It makes perfect sense that the band would finally release a live album, ‘Mirrorball’, featuring all of the triumphant hits that continue to make Def Leppard one of the most admired rock bands in the world.

‘Mirrorball’ was recorded across the world over the course of many of the band’s sold-out dates and features all of the classic songs that have made Def Leppard one of the most respected and beloved power rock bands in the world. The album captures the group’s legendary concert experience at its thunderous best, bringing together live versions of classic Leppard hits such as “POUR SOME SUGAR ON ME,” “ROCK OF AGES,” “FOOLIN’,” “HYSTERIA,” “PHOTOGRAPH” and an incredible rendition of “BRINGING ON THE HEARTBREAK.” With their creative juices at full flow, the band has also added three new studio tracks: “UNDEFEATED,” “IT’S ALL ABOUT BELIEVIN'” and “KINGS OF THE WORLD,” that are undeniably Def Leppard and take their place with ease within this classic setlist.

Joe Elliott says, “I’m really happy that we’ve been able to include three brand new songs on the album, all VERY different from each other & a teaser of what our next studio album will be like. We could have waited until next year, but to be quite honest, we’re so excited with the new songs we want people to hear them now!” Rick Savage adds, “The 3 new songs on this release are what Def Leppard is and has always has been about. These songs are not just thrown in to have something not heard before. Personally, I think it’s THE best work we have put together in years. From the “Sugar” quality of “Undefeated” to the Hysteria/Animal melodic rock of “It’s all about Believing,” to the ambitious and over the top epic, “Kings of the world. “The message is in the titles. If ever you needed reminding, the heartbeat of Leppard is as strong as ever.”

Also included will be a 50 mins. bonus DVD that contains energetic live performances and intimate backstage footage of the band captured on the road.

‘Mirrorball’ follows the band’s 2008 studio release, SONGS FROM THE SPARKLE LOUNGE, which debuted at #5 on the Billboard Top 200, marking the group’s highest chart position in the USA since 1992’s ADRENALIZE.

With more than 65 million albums sold worldwide and two prestigious Diamond Awards (Def Leppard are one of only five rock bands to have two consecutive 10 million plus selling albums in the U.S. – the others are The Beatles, Led Zeppelin, Pink Floyd and Van Halen) to their credit, Def Leppard – Joe Elliott (vocals), Phil Collen (guitar), Rick “Sav” Savage (bass), Vivian Campbell (guitar) and Rick Allen (drums) – continue to be one of the most important forces in rock music.

Over the course of their career, the band has produced a series of classic groundbreaking albums that set the bar for generations of music fans and artists alike. The group’s spectacular live shows, filled with powerful melodic rock anthems, continue to sell out venues worldwide. Their epic live show and arsenal of hits have become synonymous with their name, leading Def Leppard to be heralded as an institution in both the music and touring industry.

CDd2; Two Steps Behind; Bringin’ On the Heartbreak; Switch 625; Hysteria; Armageddon It; Photograph; Pour Some Sugar on Me; Rock Of Ages; Let’s Get Rocked; Action; Bad Actress; Undefeated*; Kings of the World*; It’s All About Believin’*.(* New studio tracks)

The new single “Undefeated” can be streamed on www.defleppard.com and on Frontiers Records webradio: www.frontiers.it/webradio