To celebrate the 18th year anniversary of the release of their fifth studio album Adrenalize, Def Leppard unveiled a “facts” video about the record last month. 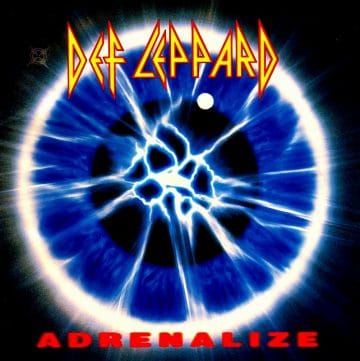 Whilst the band worked on the follow up to “Hysteria“, the start of the decade was suddenly met with tragedy.

January 8, 1991 marked the darkest day in Def Leppard‘s history – the death of guitarist Steve Clark at the age of thirty.

Clark had worked on demos for the forthcoming album, “Adrenalize“, and the band resolved to finish it as a four-piece.

The belief that Clark would have wanted the band to go on without him kept Def Leppard from going under.

It was huge and instant success, topping charts in multiple countries whilst seven of the ten tracks were released as singles.

The sound marked a sonic contrast to the band’s pain and loss, with singer Joe Elliott stating that “Def Leppard” was an escapism band.

Seven singles were released from “Adrenalize“, and the band were asked to perform “Let’s Get Rocked” at 1992’s MTV Music Video Awards.

The album has sold in excess of seven million copies worldwide, and is certified 3x platinum in the US.”

Sleaze Roxx stated the following in its review of Adrenalize: “1992 and the musical landscape has changed! I don’t need to explain in great detail but the usual musical suspects from the Pacific Northwest chucked a lot of Southern Cal Cheeserock Acts into the dumpster and fair enough, so many cheeseball acts were getting deals in the late ’80s that the market was over saturated. Trust me folks! I got hosed on a few but I won’t name names yet.

So Leps are down to four as the great king of riffs Mr. Steve Clark passed away in January of 1991! For me and some others, so did the quality of tunes! So if my memory serves me correct, five songs on Adrenalize were co-written by Clark (good songs) before he passed and five without (so so songs). That kinda shoulda been the sign but here we are 25 years later and I finally figured it out just how important Clark was to Leppard and it isn’t until he dies that I figure it out…”