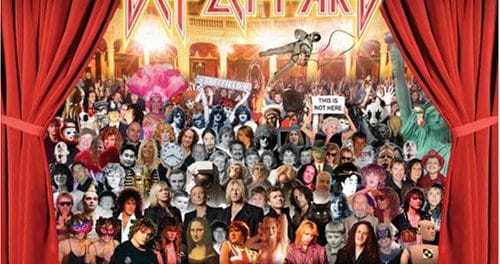 To celebrate the 12th year anniversary of the release of their tenth studio album Songs From The Sparkle Lounge, Def Leppard have unveiled a “facts” video about the record. 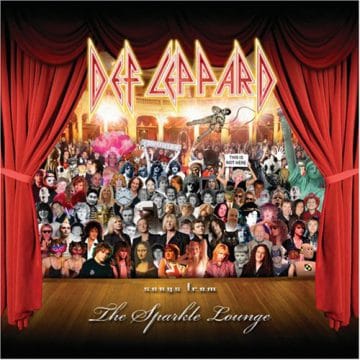 “In 2007, Def Leppard announced that their first album since 2002, was nearly finished.

The album was tentatively titled, “Songs From The Sparkle Lounge“, and Joe Elliott joked that: “Until someone comes up with a better name this will be the final title upon release.”

Joe explained to Billboard that the title referred to a backroom at shows, adorned with mood lights, where the band would work on new material.

The album would be Def Leppard‘s tenth studio album, their 14th overall. It was released on April 25, 2008 in Europe and April 29 in North America.

Joe noted that the band had planned to produce something reminiscent of “early 70s AC/DC“, a sonic blend of the much-loved “Hysteria” and “High ‘n’ Dry” albums.

The sound is encompassed in the single, “Nine Lives”, which features legendary country singer, Tim McGraw, and debuted on Guitar Hero III.

Sleaze Roxx stated the following in its review of Songs From The Sparkle Lounge: “Def Leppard have always hated being labeled as heavy metal, and they won’t have to worry about anyone calling Songs From The Sparkle Lounge metal. Actually you might even have trouble finding people that would even consider this rock. To my ears this CD is more of a pop record, custom made for current radio trends. This isn’t the Def Leppard that I grew up loving, but it may be a Def Leppard that younger listeners can grow with. Pyromania and Hysteria seem like a lifetime ago, not just in years but also in style – welcome to the ‘new’ Def Leppard.”

To celebrate the 12th anniversary of Def Leppard’s 10th studio album – “Songs From The Sparkle Lounge”, find out all the facts behind this album ✨ LISTEN TO …