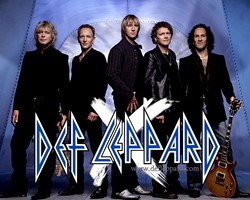 ‘Mirrorball’ is Def Leppard’s first ever live album and features rock classics such as “Animal”, “Pour Some Sugar On Me”, “Photograph”, “Nine Lives” and “Rock Of Ages”. The album also brings together three brand new studio tracks — “Uundefeated”, “Kings Of The World” and “It’s All About Believin'” taking their place with ease within this classic setlist.

‘Mirrorball’ will also be available online, marking the first time the band’s music will officially be made available for digital purchase. Def Leppard will also be releasing their new community based website in May, which is being developed to be the ultimate Def Leppard fan experience and go- to destination for all things on the band.

Full ‘Mirrorball’ tracklisting is as follows:

Def Leppard remain one of the world’s biggest and most successful live acts. The band last played the UK and Eire in 2009 – headlining Download festival that year after a hugely successful sold out UK Arena tour in 2008. 2011 will see Def Leppard headline Download Festival for the second time in three years. The band will also play Arena shows in both Dublin and Belfast with legendary special guests Alice Cooper and Thin Lizzy. Full details below:

With more than 65 million albums sold worldwide and two prestigious Diamond Awards (Def Leppard are one of only five rock bands to have two consecutive 10 million plus selling albums in the U.S. – the others are The Beatles, Led Zeppelin, Pink Floyd and Van Halen) to their credit, Def Leppard – Joe Elliott (vocals), Phil Collen (guitar), Rick “Sav” Savage (bass), Vivian Campbell (guitar) and Rick Allen (drums) – continue to be one of the most important forces in rock music. Over the course of their career, the band has produced a series of classic groundbreaking albums that set the bar for generations of music fans and artists alike. The group’s spectacular live shows, filled with powerful melodic rock anthems, continue to sell out venues worldwide. Their epic live show and arsenal of hits have become synonymous with their name, leading Def Leppard to be heralded as an institution in both the music and touring industry.

‘Mirrorball’ will be released through Bludgeon Riffola/Mailboat Records. For dates, see below: