Aussie hard rockers Dellacoma have announced that they have parted ways with founding member and bassist Rick Reynolds and do not yet have a replacement meaning that they will be cancelling their tour dates in May and June for this year. 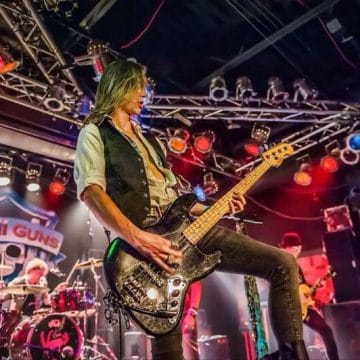 The following message was posted on Dellacoma‘s Facebook page yesterday (with slight edits):

“It is with a heavy heart that we must announce that we have decided to part ways with our bassist and founding member, Rick Reynolds. We wish him all the best in his future endeavours and ask for discretion and sensitivity in this matter and that you allow time and space as this is a fresh and new decision but also not one that has been taken lightly.

Dellacoma will continue and we will be honouring most of our shows after 1 July (including Summerfest, Paulie’s and 4th of July)

Unfortunately we will be cancelling all our May and June tour dates as we seek and rehearse a suitable fill in.”

Dellacoma‘s “Story” on their Facebook page states as follows (with slight edits): “Dellacoma is a brash, explosive and hard hitting rock n roll band working tirelessly to blaze a trail thru the current cookie-cutter world of mainstream music. With a relevant yet familiar sound, a relentless work ethic and an exotic yet somehow natural formation (with 2 members hailing from Australia and 2 from Texas); this 4 piece outfit is primed and ready for action. Having already shared the stage with a slew of major acts (including Def Leppard, Skid Row, Black Label Society and Winger) and graced main stages at major festivals (including Rock USA, Rocklahoma, Rockin the Rivers and Rock Fest) they are pummelling their way around the world and gaining new fans along the way with their honest, raw and powerful songs and stage presence.”

The group released its debut album South Of Everything back in April 2015.

Dellacoma‘s “Movin On To Something New” video: