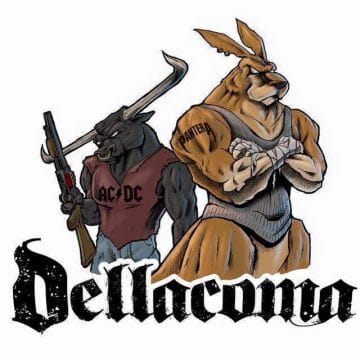 The following message was posted on Dellacoma‘s Facebook page on February 28, 2019 (with slight edits):

“For the first time since 2016, we’ve got a brand spanking new song to unleash!!! Official lyric video for “Vampires (A Cautionary Tale) is out now!! Pre-order for the single will be live within the next few days on all digital channels.
Big love to Frank Lakoudis for his stellar work on this lyric video! Enjoy??”

The group’s “Story” on its Facebook page states: “Dellacoma is a brash, explosive and hard hitting rock n roll band working tirelessly to blaze a trail thru the current cookie-cutter world of mainstream music. With a relevant yet familiar sound, a relentless work ethic and an exotic yet somehow natural formation; this 4 piece outfit is primed and ready for action. Having already shared the stage with a slew of major acts they are pummelling their way around the world with their honest and raw songs and powerful stage presence.”

Official lyric video for the single “Vampires (A Cautionary Tale)” from the forthcoming second album by rock band DELLACOMA.Written by Dellacoma Rio/Jasin To…