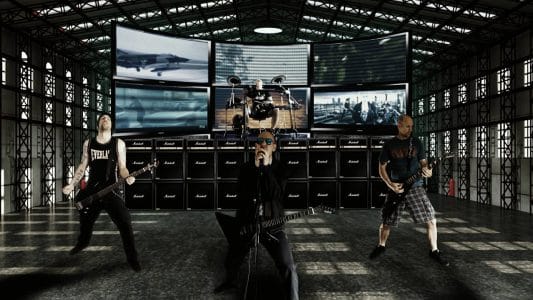 Back in September 2017, Lewis spoke to Sleaze Roxx and stated the following (in part) about his background: “I started playing guitar at age 22 and started home recording for a few years. I joined/helped shape a local band into a live capable unit and again played the London/National circuit before line-up changes/alcohol issues stopped it from working and I again returned to the home recording platform. Now as Demons Sing Of The End and in early 2017, I decided to try to add a video element as live playing isn’t possible and I can create a “band” vibe using a green screen. The tracks “We Came To Fight,” “A Soul To Sell” which is a tribute to the ’86 film Trick or Treat and “Crawl Back To Hell” on my YouTube channel represent the start of a “new album.””

Demons Sing Of The End‘s “Take Life By The Throat And Scream” video:

From the debut album – Take Life By The Throat And Scream! OUT NOW!!!GOOGLEPLAYhttps://play.google.com/store/music/album/Demons_Sing_of_the_End_Take_Life_by_…

Demons Sing Of The End‘s ‘The Making of Take Life By The Throat And Scream music video’: