While Denman fans continue to wait for the group’s full-length album Raw Deal to be released, the Denman brothers Dakota and Ben have formed a Metallica tribute band titled Fade To Blackened along with Denman bandmate and bassist Robert Crede. Raw Deal was initially announced to be released on June 29, 2018 and the single “Higher” was released in advance. 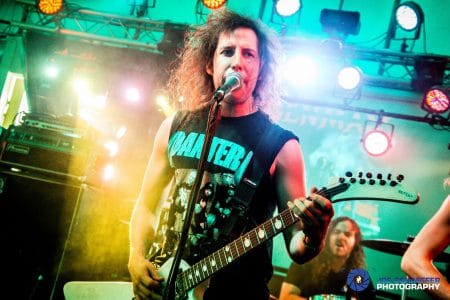 Announcement time! After shredding lots of Metallica covers all over Nashville, we have decided to start up a Metallica tribute band. Here is our brand new FB page with lots of content to come, and also some songs that I recorded, and had mixed by the man who mixed MASTER OF PUPPETS!

Sleaze Roxx caught Denman playing live at Sleazy Slimey Sunday 3 at the Cancun Cantina in Hanover, Maryland, USA back in early May 2018 and the group played a cover of Metallica‘s “Seek & Destroy” to which Sleaze Roxx stated in its concert review: “I was surprised — but shouldn’t have been surprised given the numerous early Metallica connections — that Denman chose to cover “Seek And Destroy.”  The band played a killer version of the song which conjured memories for me of unsigned Shockback in the ’80s closing their set with their own rousing rendition of the Metallica classic. It was definitely a case of deja-vu for me. It’s not a knock in any way to Denman as their cover of “Seek And Destroy” was a great one and got the crowd singing along to the anthemic chorus portion. Whatever the case, it was fun to relive the past and back in the ’80s when Shock covered “Seek And Destroy”, Metallica weren’t the household name that they are now and the song was more of a cult favorite than an all-time classic.”