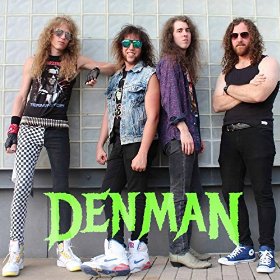 Nashville, Tennessee has become the new home for the modern glam scene. With great young bands like Lipstick, Kaato and The Tip calling the city home, as well as classic acts like Slaughter and Winger relocating there, the comparisons of Nashville to the ’80s Sunset Strip have become more and more frequent. Denman, one of the hottest new acts on the Nashville scene, has released their debut single “High Heels and Leather” produced by legendary producer Michael Wagener, with a sound that harkens back to the days of Mötley Crüe and Poison.

Denman was formed in the spring of 2016 by brothers Ben and Dakota Denman. The latter is becoming a rising star in the hard rock scene and has already performed as a guitarist for both Enuff Z’Nuff and Vince Neil. Ben Denman fronts the 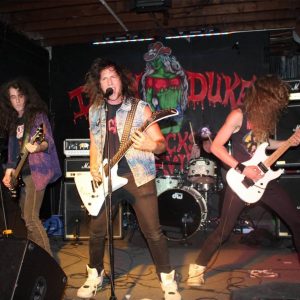 band and shares lead guitar duties with his brother, while Clint Richardson and Ted Karol play bass and drums respectively.

“Denman, out of all the bands out there today, sounds the most authentically ’80s,” says Lipstick frontman Greg Troyan. “The Tip sounds very bluesy and Kaato has a contemporary dance pop feel, and Lipstick is kinda doing it’s own thing, but Denman sounds like a blast from the past. They sound like Skid Row meets Racer X, and there’s not one touch of modern influence in their sound. If you’re craving an ’80s sounding band, Denman is your best bet.”

The band’s debut single can be purchased on Amazon (see link below) and the band can be found on Facebook.