Former Iron Maiden and current Lionheart guitarist Dennis Stratton was recently interviewed by Jimmy Kay for Canada’s The Metal Voice. Stratton spoke about how he joined Iron Maiden and his contributions to some of the early song arrangements.

In terms of how he ended up joining Iron Maiden, Stratton indicated (with slight edits): “I was with my band R.D.B., we were the resident band at Bridge House which was well known for a live music venue. Steve Harris and Dave Murray used to come and watch me play. In around 1976, R.D.B had just singed to Quarry Management which was Status Quo and Rory 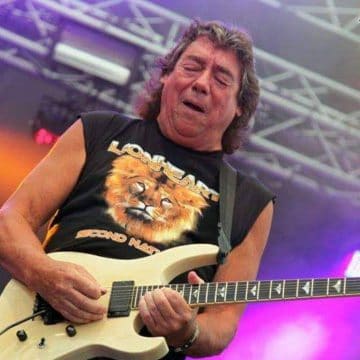 Gallagher‘s manager, Colleen Johnson. We were signed to Quarry Management so the next minute we’re on tour with Status Quo and we’re playing 60-70 thousand people in Germany and all over, with Status Quo. So when we came back from touring we had so much experience, it was like we grew up cause we were playing on the big stage and I’ve also been involved in recording in the studios. So when Iron Maiden signed to EMI, there was only three of them in the band, they didn’t have a band, there was no band because they got rid of their drummer and they got rid of the other guitarist because they weren’t good enough.

So basically when they signed to EMI, they also signed a big deal with Rod Smallwood and they need another guitarist with singing abilities and who does second guitar and who’s got recording and touring experience. So I go down and see them, they gave me the Soundhouse tapes and when I got home I’m listening.  I realize it’s only one guitar. It sounds like a kid’s band that’s just starting up. It was punky. I’m used to working with two guitars and three vocals. So they asked me, ‘Would I join the band?’ I say ‘Yes.’ I learnt the songs and went down to the studio without a drummer and we played ‘Prowler’, ‘Wrathchild’ wherever it was.

So then I say to Dave Murray, ‘I’m used to playing with two guitars in harmonies. I know you play on your own. You’re a solo guitarist. Let’s do harmonies. We need to make it sound bigger.’ So, he said ‘Great.’ So I spoke to Steve. I said ‘Steve, do you mind?’ He said ‘No.’ So I went home and started working on ‘Phantom of The Opera’ and I worked on ‘Running Free’ and I worked on the harmony guitar stuff I’ve been doing since I started playing and we went back to the studio. We started running through the songs and they sounded twice the size. Then I told my buddy Clive Burr, ‘I joined Iron Maiden and they are looking for a drummer. Are you interested?’ He said ‘Yes.’ So that day, the band went from a three piece into a five piece.”

In terms of the recording of the song “Phantom of The Opera”, Stratton stated: “The funny thing about ‘Phantom’ was that when we were recording, I would sit in the studio with the engineer on my own. I was left with the engineers so we started working on the harmony guitars. We start[ed] building the songs up. Then I would put down two or three parts of the vocals and the engineer loved it. It sounded really big. So we did it and we were listening to it back and then Rod Smallwood walks into the control room and he listened to it, he went absolutely mental. He went potty and he said ‘Take all that off. It sounds like Queen.’ So we said, ‘It’s your band. Can we leave one of the vocals for harmony and a harmony for guitar?’ He said ‘Yeah, but no more because it sounds like Queen.’ So that’s what we ended up with.”

With respect to his idea of re-recording ‘Phantom’ today as it was originally intended to sound, the Queen like version, Stratton indicated: “I shouldn’t really say this but, after a quite well-known interview regarding Rod Smallwood asking me to take the guitar layers and the vocals harmonies off of ‘Phantom’ because it sounded like Queen, everywhere I’ve gone since 1983-84 when Maiden started becoming one of the big bands in the world, fans would come up to me and they would say, ‘You know the interview you did where you say that ‘Phantom of The Opera sounded like Queen? I said ‘Yeah.’ ‘Why don’t you record it now and see what it sounds like you originally had in mind.’ So basically I told Steve Mann a couple of weeks ago, ‘When we do the new Lionheart album, why don’t we do ‘Phantom of The Opera’ as it was originally intended with vocals and guitar harmonies like a big production on it. And he said, ‘We can have it as the bonus track for Japan.’ So we both agreed. So I’ll go speak to Steve Harris and I’ll ask him if he’s ok with that. So I’m going to ask his permission. If he says ‘Yes’, then we’re going to record it for the new Lionheart album as a bonus track.”

You can read other excerpts from the interview with Dennis Stratton at The Metal Voice‘s website and/or listen to the interview below:

Iron Maiden performing song “Phantom of The Opera” at the Rainbow in 1980:

Iron Maiden — Phantom of the Opera