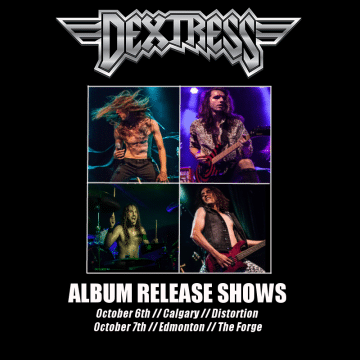 Dextress‘ debut full-length album is somewhat unique in that it was recorded back in mid-2016 with the original line-up of Janz, singer Jackson Taylor, bassist Christian Garcia and drummer Marcos Rodriguez but that line-up has gone through many changes since then. Janz spoke to Sleaze Roxx about that back in June 2017 as he stated: “It’s still them playing on it of course. We’ve done some contracts and legal stuff regarding that. Everything is good to go. So the album will be released later this year and it’ll just be a different touring band pretty much [laughs].”

Since September 12, 2017, Janz has been posting his thoughts via Facebook on the upcoming tracks of Dextress‘ debut full-length album:

1. Wild Is The Night // The only opener that would do this album justice in my opinion. I clearly remember Jackson and I sitting in my basement with an acoustic guitar, while a party was going on upstairs, writing these lyrics. It was the first song Jackson and I really collaborated on, so it’s almost an introduction to the band as much as it is to the record.

Dextress – Wild Is The Night (Acoustic)

‘Wild Is The Night’ from the upcoming debut album performed live and acoustic. Album version out now. https://itunes.apple.com/ca/album/wild-is-the-night-sin…

2. Sex, Drugs, Rock N’ Roll // This was the first real song Jackson brought to the band, and it completely captured the lifestyle he lived back in high school. The thing that I remember most about the origin of this tune is that the guitar riff was written a few years prior, and it came to me in a dream I had one night about jamming with Randy Rhoads. Oh to be 14! 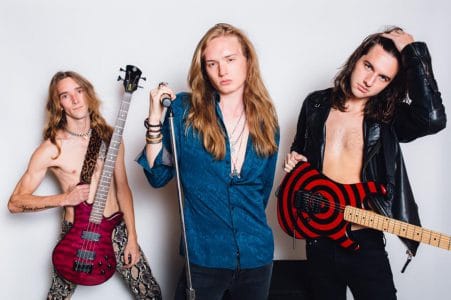 3. Bring On The Girls // This song to me incapsulates the mindset of almost every teenage boy. It oozes sunshine, señoritas, and margaritas. I like to think David Lee Roth would dig this one.

4. Reason Or Rhyme // I know it’s 2017, but the cowbell doesn’t have an expiry date! I really like the movement of this song. It’s basic groovy rock n’ roll, it’s melodic and smooth, and it takes a wicked left turn into some electric blues. What more could you ask for?

5. Red Eye Remedy // This song commonly gets taken as a drinking anthem, but if you pay attention to the lyrics, it says quite the opposite. Does that make it our “Born In The U.S.A.”? This song will always have a spot in my heart, as I wrote it when I was 14. So it’s a special day when it gets released.

6. Down By The River // One of the heavier tracks on the album indeed, Jackson says the lyrics were actually inspired by “A Streetcar Named Desire.” Another classic case of kids sitting in the basement with an acoustic guitar.

7. Oh Sweet Sister // One of the newest songs on the album, this one I feel really represents us as songwriters. I think it blends 70s glam with 80s glam, or I also like to think of it as Mötley Crüe meets Foreigner.

8. Play Nice // One of my personal favourites from the album. With a melody that will absolutely get stuck in your head, this is a love song for the woman who thinks she can walk all over you. “If you want a little piece of my love, then play nice.” Simple and sweet.

9. Guilty Man // I remember I wrote this one when I was 16 years old. I was seeing a girl who told me that her father was a detective, which inspired the idea. I also noticed how every 80s movie is pretty much good girl meets bad boy, and I thought the role reversal was interesting. This song is also a riot to play live. Early Van Halen anyone?

10. Distance // The Dextress idea of a ballad. I love to play this song live. It can be just as hard rejecting someone as it is being rejected, and this goes out to all of those hearts. The finale of this song felt like the perfect way to end the album. Lots of people said they got goosebumps their first time hearing it, so it was the obvious choice as the closer.