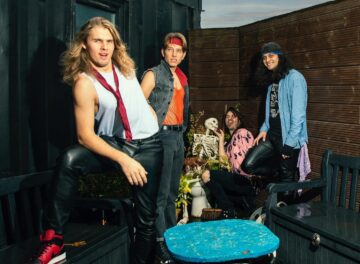 Sleaze Roxx readers may remember the Calgary, Alberta, Canada based group Dextress, whose debut full-length self-titled album finished at #8 on the Sleaze Roxx’s Top Ten Albums of 2017. The Dextress line-up that recorded that album was comprised of guitarist Mark Janz, lead vocalist Jackson Taylor, bassist Christian Garcia and drummer Marcos Rodriguez . By the time the Canadian group’s debut album was released, the band consisted of Janz on guitar, Eric Paulin on lead vocals, Reece Runco on bass and Keith Runco on drums. 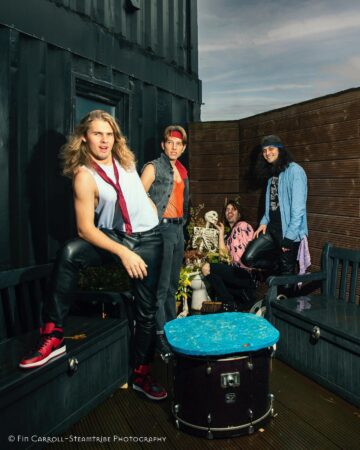 Back in March 2022, Janz revealed on one of his Facebook pages that he had been planning on relocating to the UK for some time. “As some of you know, I’ve been planning since 2018 to relocate myself (with a guitar) across the pond after graduation. After COVID put a halt on the class of 2020’s post grad plans, I’m excited to finally be making my next musical move out in London

it’ll be a sad kiss goodbye to YYC on April 5th, but I couldn’t be more ecstatic to see what my future life and future band have in store for me!

It didn’t take long for Janz to find some new bandmates and he is now part of the UK group Wild Talk whose Soundcloud page indicates: “Wild Talk elegantly straddles the line between gritty rock revelry and fizzy pop confections, leaving audiences simultaneously caught between shaking their hips and thrashing their hair. Overheated numbers like “Lips That Kill” and “Shake” flaunt a lusting red haze, while cheeky sing-alongs like “Hold Me Down” make sardonic cracks through broken lips. Arena-ready anthems like “Nicotine Tears” are a testament to Wild Talk’s insatiability for audience involvement, leaving first timers with whiplash after seeing their high octane showmen cavort across the stage. A fiery London cocktail made up of drummer Alex McArov’s carousel of snares and hi-hats, Charlie Murray’s flirtatious bass grooves, raspy and enigmatic charges of vocalist Antonio Mantino, and a drop of scorching riffs from guitarist Mark Janz, Wild Talk create an addictive sound and show that leave listeners jonesing for more.”

You can find out more about Wild Talk via their Facebook page, and listen to some of their songs via their website and/or Soundcloud page.