Canadian rockers Dextress are offering a free download of their song “Guilty Man” via their Reverbnation page. 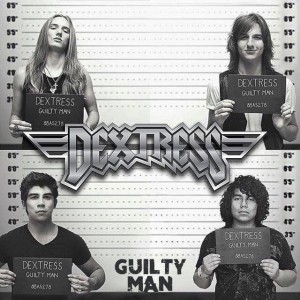 Sleaze Roxx stated the following in its review of Dextress‘ debut EP The Demo, which was released back in August 2014: “I owe one big thank you to my friend Bruce in Calgary for sending me a link to preview a new EP called The Demo, from a band unknown to me at the time called Dextress. There was no comment of any sort from my friend, simply a link to snippets of four tracks. As soon as I heard the short samples I knew that I wanted to hear more! A while later, Dextress‘ debut EP was finally being played in my CD player — call me old fashioned if you will, but I always like to have the physical album rather than downloading a bunch of songs. Dextress has to be the most exciting and promising band that I have heard in a long time. It’s very hard to believe that the songs they are coming up with actually emanate from one 16 and three 17 year old “kids” — they simply sound too good and too sophisticated to come from such young people.”

Sleaze Roxx went on to add, “The songs on The Demo are simple in that they are catchy and riff based, yet sophisticated by offering many different tempos and don’t seem to follow traditional song structures. I can’t say enough about the four songs on the EP, I just wish there were more of them to listen to.” Sleaze Roxx concluded in its review: “There is not much more to say except that any lover of the sleaze rock genre is likely to really enjoy Dextress‘ The Demo. I already can’t wait to see what Dextress comes up with next.”

Dextress was interviewed by Sleaze Roxx back in October 2014. Three of the band members were asked how they came up with the name The Demo for their debut EP to which frontman Jackson Taylor responded: “I don’t know, it just seemed appropriate because it is our demo (laughs) and we didn’t really have another name for it. We just wanted to tell people that this was the beginning and it was just a really easy way to identify what it is.”