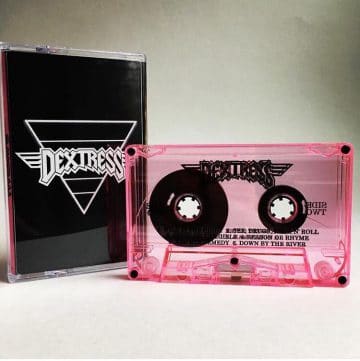 Dextress‘ self-titled debut album finished at the #8 spot on the Sleaze Roxx’s Top Ten Albums of 2017 to which Sleaze Roxx stated: “Dextress‘ debut EP The Demo came close to making the Sleaze Roxx’s Top Ten Albums of 2014. This time, with the release of their debut self-titled full-length album, it is almost impossible to deny Dextress‘ place in the top ten. Teaming up with renowned producer Glen Robinson, Dextress turned back the clock delivering ten solid tracks that will take you back to the glory days of Van Halen and the brilliance of guitarist Eddie Van Halen — the latter reincarnated as 20 year old guitar whiz Mark Janz. On their self-titled full-length album, Dextress shrewdly re-recorded the three best tracks from The Demo and added seven new songs including the different but good ballad “Distance.”

What is interesting about Dextress‘ debut full-length album is that it was actually recorded back in the summer of 2016 and there’s only one member left (Janz) from the line-up that plays on the album. Shortly after Dextress was recorded, the rhythm section of bassist Christian Garcia and drummer Marcos Rodriguez quit the band. Perhaps the biggest surprise was that lead vocalist Jackson Taylor — whose performance on Dextress is stupendous and Robert Plant like — stepped down “temporarily” in March 2017. The good news is that to Janz‘s credit, he has been able to  keep the Dextress ship moving forward and the remaining band members currently consist of singer Eric Paulin, drummer Keith Runco and bassist Reece Runco.”