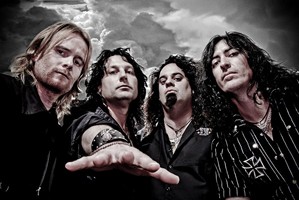 Perth rockers Diamond Eye have been nominated for ‘Song of The Year’ in theMetal category at the Western Australia Music Industry Awards for the title track oftheir forthcoming EP ‘Sound Of The Guns’.

“We are honoured to be nominated for WAM song of the year. This is avictory for all the people who have supported us and championed DiamondEye from the beginning,” says bassist Chase Cameron.

The winner of the category will be announced at the annual WA MusicIndustry Awards night on October 12th — just two days before the bandofficially launch the EP at Perth’s Amplifier Bar.

“We can’t wait to hit NSW and show everyone why our WA fans keep comingback for more. Playing with the well established boys from Sunset Riotmakes for a 3 night spectacle of rock and roll not to be missed” says GregFawcett, Diamond Eye’s lead guitarist.

‘Sound Of The Guns’ is us opening fire upon the rock world. It’s a menacingstatement of which we are very proud,” states Diamond Eye frontman Will Kelly.

More information on Diamond Eye can be found at www.diamondeyeofficial.com and www.facebook.com/DIAMONDEYEBAND.