German hard rockers Diamonds and Dice have released a video for the title track of their debut EP titled Outta Control, which will be released on September 28, 2018. 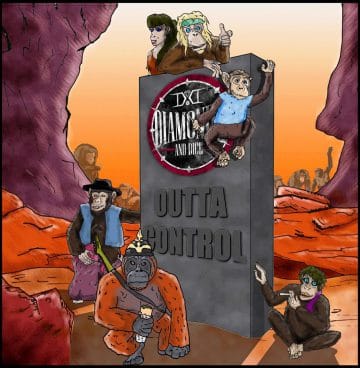 The group was interviewed in German earlier this year by Szene Night.

In terms of how Diamonds And Dice got their band name, the group responded (as translated by Google with slight edits): “Frank is a game addict and spends all his free time in the playroom when he’s not writing guitar riffs. When he had so much debt that he had to pledge his mother’s VW Polo, he wanted to start a rock band to get rich. It worked in the ’80s. He has taken the band name from numerous casino visits.”

With respect to how the band got together, the group responded (as translated by Google with slight edits): “Since the Polo was now gone, the garage could be converted into a rehearsal room. The search for fellow musicians, however, turned out to be more difficult than expected. Frank had to take what he could get: a mediocre medieval minister from the neighboring live-action roleplay group; a melancholic indie guitarist and a very young drum student (not to exceed the average age at Local Heroes). Since Frank generally considers bassists unnecessary, he did not originally want to occupy the post. However, when he then met his school friend Mücke on a zoo visit in Bremerhaven — he trained as a zoo keeper and was mistakenly imprisoned by his colleagues in the monkey enclosure — he freed him without further ado and gave him the four-string with the promise that the income of the band in training would soon exceed many times. So the band was complete.”