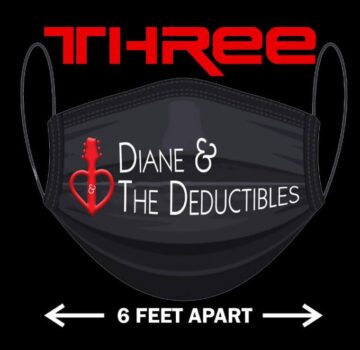 “There is indeed a world of difference between the numbers Two and Three, especially if you are referring to the audio journey of Diane & The Deductibles. Two was released in better days, when live music was rampant, before the signs of a world filled with news of Covid-19 and social/political unrest.

Three – 6 Feet Apart finds Diane & The Deductibles and their listeners in a whole different world where creativity and hope remain alive even in the shadow of a deadly pandemic. Conceived during the tumultuous year of 2020, Diane & The Deductibles made the best of downtime from playing live, and present to their friends and fans Three  – 6 Feet Apart the next chapter in their rocking legacy from these talented and diverse musicians.

And today, Diane & The Deductibles announce the track listing and cover art for their upcoming album Three – 6 Feet Apart …”