Diemonds’ acoustic version of “Over It” on Naked News

Canadian sleaze rockers Diemonds‘ co-founders C.C. Diemond (guitar) and Priya Panda (vocals) performed an acoustic rendition of their song “Over It” at Naked News last year on September 17, 2015. Naked News has now uploaded the video for the world to see. 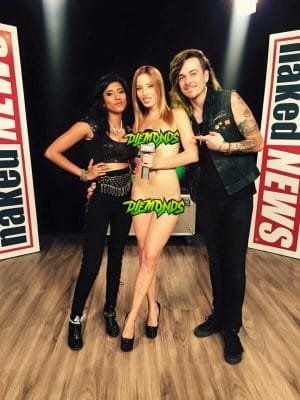 The song “Over It” was featured in a lyric video and was the first single released by Diemonds with the release of their second full-length album Never Wanna Die, which ended up #3 on Sleaze Roxx’s Top Ten Albums of 2015 and #8 on the Sleaze Roxx Readers’ Top 20 Albums of 2015. Sleaze Roxx stated the following with respect to the latter year end finish: “While Diemonds‘ Never Wanna Die may have “only” reached the number eight spot on the Sleaze Roxx Readers’ Top 20 Albums of 2015, it is in my eyes the most impressive finish out of any albums simply because 2015 is the first year that Diemonds have charted on any Sleaze Roxx year end list and the band’s members were not playing music during the golden ’80s hard rock/metal era. Truth be told, Diemonds‘ previous studio album The Bad Pack would have likely figured on Sleaze Roxx’s year end lists a few years back had Sleaze Roxx known about the Canadian rockers a little sooner. With Diemonds featured in ten Sleaze Roxx concert reviews in the last four years and the group releasing another killer studio album in Never Wanna Die, it was only a matter of time before Sleaze Roxx readers would catch on.”

None other than KISS‘ frontman Paul Stanley recently spoke about playing songs acoustically. Stanley recently stated to Cleveland’s Scene: “I’m a big believer that a great song is great because it can play on acoustic instruments or on a single instrument,” he explains. “If a song depends upon pyrotechnics or volume or production, it’s not a great song. I dare a lot of bands to strip their songs down to a few guitars and see what you get. And so I’m certainly of a school that comes out of whether it’s the Beatles or Gerry Goffin and Carole King or Barry Mann and Cynthia Weil or Ellie Greenwich and Jeff Barry, Doc Pomus, Jerry Ragovoy, Bert Berns — all of these pop writers, who really wrote from the heart. Their songs stand the test of time and I think when we play these songs acoustically, it’s very, very obvious that these are great songs.”

Diemonds‘ acoustic version of “Over It” on Naked News:

Diemonds‘ “Over It” lyric video: