Priya Panda, the voice of Canadian sleaze rockers Diemonds, will be releasing her debut solo album in 2019.

“Despite being the first album I’ve ever made that I didn’t have a chance to tour, I’m still pretty proud of what we came up with last year. Thanks to everyone who listened from afar! It means a lot. Thanks too to the team who helped make it and ensured that it saw the light of day.

Can’t wait to share a solo album with you all later on this year! You can be certain I’ll be hitting the road when it comes out, dying to get back out there! Thanks for sticking with me.”

Diemonds released their self-titled and fourth studio album back in August 2018. The album finished at #5 on the Sleaze Roxx’s Top Ten Albums of 2018 and Panda stated as follows (in part) about the album’s year end finish via Diemonds‘ Facebook page today: 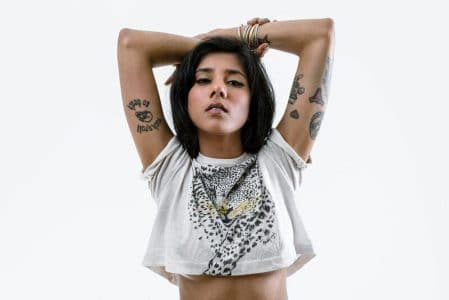 “Super proud of making the 5th best record of 2018 according to our friends at Sleaze Roxx – thanks for the constant support!

If you don’t yet have a copy of our best record yet, we have a handful of copies remaining at: Diemonds.bigcartel.com“

Sleaze Roxx interviewed Panda around the release of Diemonds‘ self-titled album and asked her how she felt that the record progressed from the previous ones. Panda replied: “Hmmm. I think that we definitely have some new songs that — it’s like a lot of the songs — you know, the more we move forward, the more we reference our past ’cause that’s our sound. I think that there are a lot of songs that could belong on ‘Never Wanna Die.’ There’s a couple of songs that you know could have even [been in] ‘The Bad Pack’ era in this weird way but at the same time, I think that we’ve evolved to the point where we have a whole new sound. If I was ever to do my own thing or make my own music, like I kind of see where that’s headed as well. Ummm — which is something that I never considered until I made this record.”

Panda was then asked about whether she would branch out as a solo performer to which she replied: “Hmmm. I just want to work. I just want to do that as much music as possible and play as many shows as possible. Get back on the road and yeah, I want to increase my opportunities to do that. As many as I can find, I’ll do. I have always been committed to my band. I created it. It’s my baby but you know, there comes a point in time when you know, you want to spread your wings, try new things, do more.” When asked whether she would be playing the same type of stuff as Diemonds or different stuff as a solo performer, Panda advised: “Well, once you hear the record, you can kind of you know hear where my mind is at or has been. So you tell me [laughs].”

In terms of how long that Panda had been contemplating branching out as a solo artist, the Diemonds frontwoman stated: “I think that I have always been really open to opportunities. You know, I was in She Demons for a while there. I have performed other people’s songs. I have collaborated. I just did a song, a duet with Finny on the new [The] Mahones record. You know, I am always down so if the opportunity comes up, I am always open to it. I don’t think that it’s anything new. It might just be time for me. I have a lot to say. I have more to say now than I ever have.”