Big news for Diemonds guitarist Daniel Dekay as he has some big shoes to fill in replacing Exciter‘s long-time guitarist and founder John Ricci who stepped down from the thrash band last month. 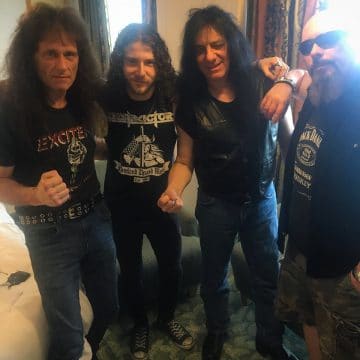 Wikipedia states the following about Exciter (with slight edits): “Exciter is a Canadian speed metal band from Ottawa, Ontario. They are widely considered to be one of the first speed metal bands and a seminal influence of the thrash metal genre. Exciter have sold nearly 300,000 units in the USA and a total sales close to 500,000 units worldwide. Despite many changes in personnel, the band has managed to keep a small but dedicated following for over 30 years.”

With the departure of founding guitarist John Ricci, Canadian speed legends EXCITER are hyped to reveal that Daniel Dekay (Diemonds, BangerTV) will be taking the position as the new guitarist for the band. A longtime friend of the EXCITER family, Dekay was a natural choice and a perfect fit to keep this thrash machine pounding. Dekay joins forces with original members Dan Beehler & Allan Johnson to round out this lineup of the band which is already working on new tunes with plans for a full length studio record. Stay tuned – much more to come for you maniacs! All press, booking, and other inquiries can be sent to: exciterband@gmail.com”

“Some rather heavy news in the EXCITER camp. Due to certain professional and personal differences, John Ricci has decided to leave the band. I wish to inform the fans worldwide that Dan Beehler and I are going to forge on with our song writing and recording however live shows will be postponed until such a time that we can find a suitable guitarist. As I am the sole administrator of the EXCITER Original Facebook page I will continue to post from time to time to keep up the legacy of what we have accomplished over the last four and a half years but I will no doubt create a whole new Facebook page for the next incarnation of EXCITER. In the meantime, all the best of luck and health to John.”