Diemonds featuring frontwoman Priya Panda will be releasing their latest self-titled album on CD with bonus tracks in Japan tomorrow (on April 17, 2019). The band had originally only released a limited edition CD of the release in August 2018 capped at 100 copies and which sold out in less than a day.

Diemonds‘ self-titled album finished at #5 on the Sleaze Roxx’s Top Ten Albums of 2018 to which Sleaze Roxx stated: “Diemonds‘ fourth studio album dropped with little fanfare and almost out of the blue this summer, and as usual, the Canadian sleaze rockers changed their sound quite a bit. So much so that I have read the gamut with respect to this release from people 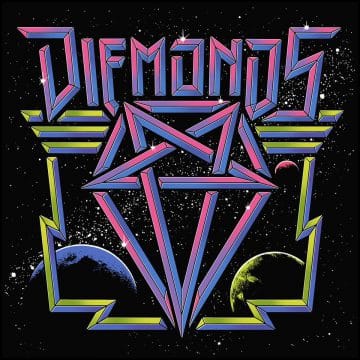 thinking that it’s the album of the year to people being angry with the definitely poppier sounds on certain tracks. It’s amazing that Diemonds even released a record this year given that there was a lot of infighting between band members and I have no idea who is in the band at this time beside frontwoman Priya Panda. There’s no doubt in my mind that Diemonds could have challenged for the top album of the year if there had been more of the faster tracks such as “Breathe” and “Warrior.”

However, that is not the case as sandwiched between those two tracks are a wide array of songs covering many styles from the more modern “Our Song” to the ballad “Miss You” to what could almost be categorized as pop rock with “Waiting For Something.” The three constant on Diemonds are Panda‘s beautiful singing (she has never sounded so good on an album before), the heavier guitars that save the album from getting labelled “melodic rock” and the killer melodies time and time again. The melodies are so good that this is the only album out of the top ten that I can play at least half the songs to my top 40 / hip hop loving daughters without any complaints. Hell, I even got a request from one of my daughters for the song “I See Red” on Boxing Day. Will this be last album for Diemonds? It would be a real shame and I certainly hope not after three stellar releases in a row (2011’s The Bad Pack, 2015’s Never Wanna Die and this year’s Diemonds).”

The following message was posted on Diemonds‘ Facebook page less than an hour ago:

“In 2015 we had the absolute honour of playing Tokyo, Japan, one of our favorite places to play and visit on the planet.

On April 17, our self-titled album drops on CD in Japan/Asia on Spiritual Beast – and yes of course there are bonus tracks and an obi strip!

This is the ONLY place to buy a CD version of our album. You can order online worldwide via Spiritual Beast, Tower Records Japan or Disk Union!

We’d love to play in Japan again, you never know! We miss you guys!”