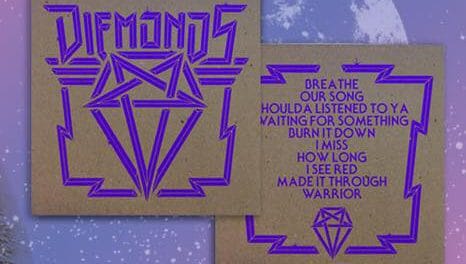 After selling out the pre-orders for their limited vinyl edition of their upcoming new self-titled album, Canadian sleaze rockers Diemonds are released pre-order information for their new album on CD via the group’s Big Cartel page. Of note, the CDs are also limited to 100 copies and are expected to sell out quickly. Diemonds‘ limited vinyl edition of their new album sold out within a day. 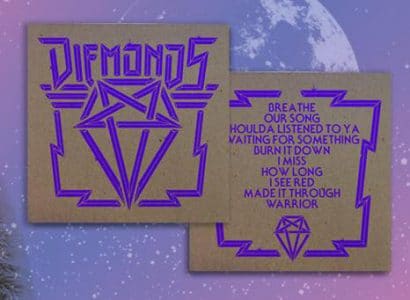 The following message was posted on Diemonds‘ Facebook page less than 30 minutes ago:

“Blood, tears and #Diemonds. Only 100 copies of the hand silk screened CD version of the new album are available or will ever be available. Want one? There’s 50 left at diemonds.bigcartel.com – they’ll be gone within the day. Love you guys, thanks for all the support. For the rest of you, August 10th, mark it in blood.

Sleaze Roxx just interviewed Diemonds‘ frontwoman Priya Panda who stated as follows when asked about the release of the band’s new self-titled album on CD: “So, I guess that we are telling you for the first time that we are putting out the album — 100 copies of it, the same way that we just did on vinyl. We’re probably going to sell it to our hardcore fans. Kind of whoever gets it gets it. It’s something that we did — we are kind of going back to our roots — kind of limited edition albums and tapes and records. It’s huge part of our own personal collections and we kind of want to go back to that.”

In terms of writing some of the new Diemonds songs with a new writing partner, Panda advised: “For me, I had the wicked experience of getting to write with one of my all-time favorite songwriters, Michael Woods. I would say because he played guitar in Damone and was a huge part of the songwriting process for that band. And it’s probably one of the bands that I have listened to the most in my entire life. If it wasn’t for them, I don’t think I would — that Diemonds would be the same band that they are, that we have been. So it was a really cool experience to get him to come to Toronto and meet him. I hadn’t even met him before. It was really cool because he’s just the mind behind these songs that are like the soundtrack of my life. Yeah, so we co-wrote three of the songs on the album.”