Canadian sleaze rockers Diemonds‘ new album Never Wanna Die is scheduled to be released in some markets on August 14, 2015. 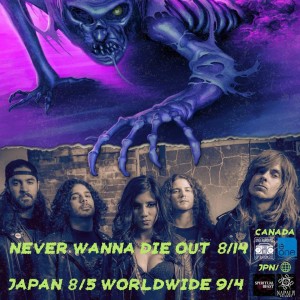 After releasing a lyric video for the song “Over It”, Diemonds have now provided a preview for all of the tracks from their forthcoming new album Never Wanna Die.

Diemonds have recently released a pledge campaign in Canada which includes some one of a kind items including owning guitarist Daniel Dekay’s old “Jackson Dinky” axe (covered in the blood, sweat and tears of years of countless Diemonds shows), a rad pair of vintage cowboy boots worked in and worn by sexy lead vocalist Priya Panda on so many tours including Diemonds‘ tour to India in 2009, hanging out with guitarist C.C. Diemond at a Toronto Blue Jays baseball game, owning the one of a kind massive festival stage backdrop used by the band on its 2013 Skeletour, owning the ’80s black Ludwig drums that have been a part of the Diemonds family since almost the beginning and that has appeared in all the band’s videos and accompanied the group on all its tours, and obtaining the ultimate backstage experience by being a roadie for a day.

Never Wanna Die can also be pre-ordered in the US and the rest of the world.