Canadian sleaze rockers Diemonds have finished recording their latest record Never Wanna Die and are ready to unleash it onto the masses on August 14, 2015. However, they need help breaking free from the debt keeping them behind bars! 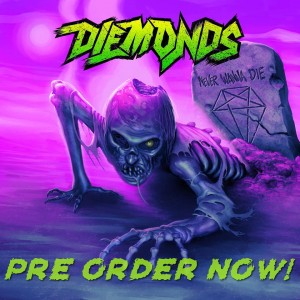 The band is asking their Die-Hards to come together and help bail them out. By pre-ordering the new album, you’ll be helping them while gaining access to behind the scenes video content that nobody else can see. Also included in your pledge are exclusive merchandise packages and epic fan experiences only available through the band’s pledge campaign. Making this jailbreak means Diemonds will be getting back on the road and doing what they do best.

Diemonds‘ pledge campaign includes some one of a kind items including owning guitarist Daniel Dekay’s old “Jackson Dinky” axe (covered in the blood, sweat and tears of years of countless Diemonds shows), a rad pair of vintage cowboy boots worked in and worn by sexy lead vocalist Priya Panda on so many tours including Diemonds‘ tour to India in 2009, hanging out with guitarist C.C. Diemond at a Toronto Blue Jays baseball game, owning the one of a kind massive festival stage backdrop used by the band on its 2013 Skeletour, owning the 80s black Ludwig drums that have been a part of the Diemonds family since almost the beginning and that has appeared in all the band’s videos and accompanied the group on all its tours, and obtaining the ultimate backstage experience by being a roadie for a day!

Of note, Diemonds‘ pledge campaign is only available in Canada. Panda noted in the Discussion section of the pledge campaign site that “This pledge page is for Canada only. The album is available digitally, on CD, on vinyl, and bundled with all sorts of mercy at the following links depending where you live: USA… Japan… Rest of World…”.

Diemonds‘ full length record The Bad Pack received a rave review from Sleaze Roxx back in August 2012: “Once I put The Bad Pack CD on the stereo, it simply blew me away. As of writing this review, I have listened to the album too many times to recall — it is that good!…Had I known about Diemonds‘ The Bad Pack back in 2011, when the band began selling it at their live shows, it would have been my pick for CD of the year — for now, it is my pick for album of the year for 2012!”.

Sleaze Roxx stated the following upon witnessing Diemonds‘ opening for the legendary Sebastian Bach in December 2014: “Just like when I first saw Diemonds play on the Phoenix stage three years ago, electricity was in the air as the band put on a spirited and strong performance… I think it is safe to say that Diemonds put on one ass-kicking performance and totally justified Sebastian Bach handpicking them to open before him.”.