Canadian sleaze rockers Diemonds have released their new self-titled and fourth studio album today. You can hear snippets from each song off Diemonds‘ new album at cdbaby.com.

Diemonds‘ latest record was a difficult one to make for the band and especially for frontwoman Priya Panda. During that time, long-time guitarist Daniel Dekay was excluded from the recording process due to interpersonal issues but remains in the group. 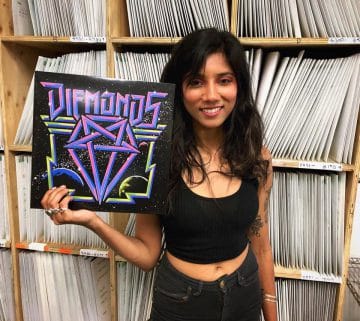 In a recent interview with Sleaze Roxx, Panda opened up about some of the major struggles that she and the band faced heading into and during the recording of Diemonds‘ self-titled album. Panda stated: “Over the last few records that I have made, obviously there are love songs. There were songs about dating and relationships but it was all basically about this one mysterious figure. The same person that I was dating for the last decade and that relationship came to an end very — it was pretty much right before recording the record, which was pretty hard for me. So it’s like going through the break up and dealing through all the changes and you know, being alone, navigating the world as a single person. Something that I hadn’t done my entire adult life. All that kind of stuff and [voice shaking] so two days before I recorded the album, I saw this person — you know, my life partner of the last decade — on the doorstep of [voice shaking] my best friend’s house or somebody pretending, claiming to be a really good friend of mine at 9:00 in the morning…. Yeah, it like changed my whole life and I had to go into the studio literally two days later.”

In terms of the rumours that Diemonds were about to break up at one point during that time period, Panda stated: “Ummm. There were massive interpersonal issues with the band at that time. Absolutely. We’ve been a band for a long time and there’s been a lot that we’ve done. There’s been a lot that we have tried to do that just hasn’t, you know, materialized for us and starts… We love doing it and we love playing shows and making albums and meeting our heroes and meeting our fans but it weighs on you when you come home and you’re fucking broke still. Like I have seven jobs when I come home from tour…. It’s tough. It’s fucking insane. Yeah. The whole thing is difficult to maintain all the time. I mean obviously we’ve had [past] members pass away. We’ve had members fuck off. There’s people that have played in our band that I would never want to see their face ever fucking again.”

With respect to who played on Diemonds‘ self-titled album, Panda advised: “Well, the people that play in the band are on the album — [guitarist] C.C. [Diemond], [bassist] Tyrone [Buccione], [drummer] Kyle [Lecourt] and me.” In regard to guitarist Daniel Dekay, Panda stated: “Errr. Dekay didn’t play on the record.” When asked how come, Panda advised: “Ummm. [Sigh] That goes back to the massive interpersonal issues that we had on within the band during the recording process. There was a lot going on. Obviously, I have patched things up with Dekay but you know, it was hard there for awhile. I am glad to still have [him as] my friend.” Panda then confirmed that Dekay is still in the band.

“Happy freakin release day world! We are so proud and excited that our S/T album is out NOW.

So much blood, sweat, and Diemonds went into making this happen and we can’t wait to let it connect with Die-Hards worldwide.

The more things change, the more they stay the same. Lots of loud fast rock music plus some new sounds too.

If ya dig rock n’ roll, here’s our latest contribution to your music library. Thanks for being with us all these years, more to come!