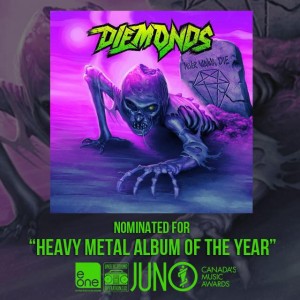 In a surprise move, Canadian sleaze rockers Diemonds‘ band members (including singer Priya Panda, and guitarists C.C. Diemond and Daniel Dekay) have teamed up with Toronto metal hardcore Cancer Bats‘ singer Liam Cormier to do a cover of the five songs that are nominated as single of the year for the upcoming Juno Awards

Diemonds and Cancer Bats perform a metal medley of Drake‘s “Hotline Bling”, Alessia Cara‘s “Here”, Justin Bieber‘s “What Do You Mean”, Ria Mae‘s “Clothes Off”, and The Weeknd‘s “Can’t Feel My Face.”

Diemonds‘ new album Never Wanna Die, which was released in August 2015 has been nominated for a Juno Award for “Heavy Metal Album of the Year.” The other albums that have been nominated are Cancer Bats‘ Searching For Zero, Fuck The Facts‘ Desire Will Rot, Kataklysm‘s Of Ghosts and God and KEN mode‘s Success. The prestigious Juno Awards is the Canadian equivalent of the Grammy Awards and has been dubbed as the “Canadian Grammys” in the past. The 45th annual Juno Awards will be held this year from March 28 to April 3, 2016 in Calgary, Alberta, Canada.