Diemonds to head to Japan

Canadian rockers Diemonds have just announced that they will be heading over to Japan to be a part of this year’s Japanese Assault Fest alongside Enforcer and Suicidal Angels in Tokyo, Japan on November 7 and 8, 2015. This will be in support of the band’s Japan release of their new album Never Wanna Die via Spiritual Beast. 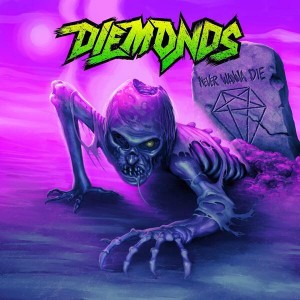 Diemonds announced today on their Facebook page: “It’s our first time playing or visiting Japan and we are extremely stoked for this chapter in our story!”

This is not the band’s first overseas foray as the group played in the north east region of India about six years ago. At that time, the band was only the fourth international band to play in that region after the Scorpions, Mr. Big and a supergroup made up of ’80s stars.

The sleaze rockers’ new album Never Wanna Die has now been released worldwide to critical acclaim. Sleaze Roxx stated in one of its reviews of the new album: “As I previously indicated and should be emphasized, all of the tracks on Never Wanna Die are good ones. At the end of the day, Never Wanna Die is a more modern sounding commercial effort compared to The Bad Pack and for that reason, does not measure up to The Bad Pack in my eyes. That being said, I find that Never Wanna Die is still a solid and enjoyable hard rock album that will be getting a regular spin on my CD player for likely many years to come.” The other Sleaze Roxx review indicated: “Do yourself a favor and pick this album up. You will not regret it. I will now have to pick up their earlier albums: The Bad Pack and the EP In The Rough. After your listening experience is over, one might need to ice their shoulder or go see a chiropractor because keeping your devil horns up for 35 minutes straight might leave you with a sore shoulder. If that would be the case, can’t say I didn’t warn you.”