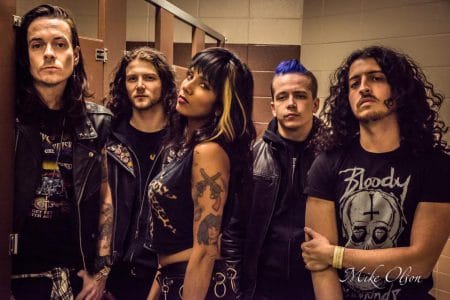 Canadian sleaze rockers Diemonds have been very quiet in 2019 with their last gig dating back to the Monsters of Rock Cruise Pre-Party #2 at the Magic City Casino in Miami, Florida, USA on February 23, 2019 given that the Hair In The Fair Festival scheduled to take place in Welland, Ontario, Canada from July 11 to 13, 2019 got cancelled. However, the group will be back in the action at the upcoming Monsters of Rock Cruise, which will take place from February 8 to 13, 2020.

Diemonds frontwoman Priya Panda has advised Sleaze Roxx that it will be a kind of a “back to the roots” scenario as the band will be performing as a four-piece rather than its traditional five-piece for the last eight years or so. Panda will be joined by guitarist Daniel Dekay (who also now handles the axe duties for Canadian thrash metal rockers Exciter), bassist Tyrone Buccione and drummer Kyle Lecourt. Guitarist C.C. Diemond will not be in the line-up for the Monsters of Rock Cruise and he also wasn’t there during the band’s last gig back in February 2019. The Killer Dwarfs guitarist Gerry Finn played with Diemonds during that show.

Diemonds‘ “Highway” video (from the In The Rough EP):