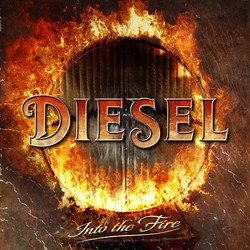 Diesel Releasing ‘Into The Fire’ On May 23rd

On May 23rd Escape Music will release ‘Into The Fire’, the debut album from Diesel — a brand new British rock band.

With lead vocals from the great Robert Hart (Bad Company and Manfred Mann’s Earth Band) and guitars from FM’s very own Jim Kirkpatrick, Diesel is a match made in heaven as they combine their song writing skills and musicianship to come up with the fantastic debut ‘Into The Fire’.

Diesel plays solid traditional rock in the manner of Bad Company, the sort of music that has firm roots in the classic vein of British hard rock with a blues element. Accompanied by Jim Copley and Pat Davey, who provide the solid rhythm backbone of the band, this quartet can give you great songs and first rate melodies all day long.

The guest list on ‘Into The Fire’ includes Ozzy Osbourne keyboardist Adam Wakeman and FM’s Steve Overland on guitar and backing vocals, rounded off with the mixing skills of Tommy Hansen. From “Fortune Favours The Brave” to “Brand New Day” Diesel present us with delight after delight as they effortlessly give us an array of classic rock tunes.

‘Into The Fire’ track listing:
01 Love Under Cover02 Into The Fire03 Starting Over04 Fortune Favours The Brave05 Brand New Day06 Bitter & Twisted07 So What Is Love08 Lets Take The Long Way Home09 Told You So10 What You See Ain’t What You Get11 Skin & Bone12 Coming Home