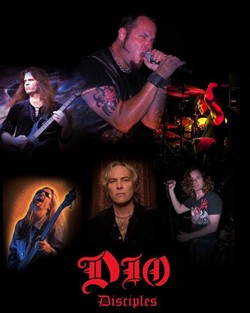 Dio Disciples Getting Ready To Embark On European Tour

Says former AC/DC and Rhino Bucket drummer Simon Wright, “A big hello from myself and the Dio Disciples to all you mighty DIO fans.We are in rehearsal at the moment getting ready to embark on our first European tour. It’s been very weird and a little emotional getting through the songs without Ronnie, I keep hearing him saying, in my head, “Lets try that part again” and “OK, lets run the set”, it helps to remind me that we have to keep playing and get the job done.

As Wendy said, “there will never be another Ronnie James Dio,” — absolutely 100% right. As we know though first and foremost Ron was a musician, and loved having a band and the music came first, with that in mind we all sat down talked and discussed the possibility of doing the Dio Disciples project. The most important point was to be able to bring Ronnie’s brilliant songs to the fans and celebrate them in the best way we know how in a live show with all of you.

Just as important is that while you read this we are doing this from the heart and for all the right reasons, Ron was like a father to me and over the years we became best friends, I’m not trying to one up anybody here, there are lots of people who loved Ron, especially and of course Wendy, but this band is something I feel very strongly about and positive about. I wish we didn’t have to do this project, I miss Ron everyday, but something tells me he would want us to carry on, work hard and continue bringing you the fans, his music.”