A great thing is hard to stop. Following the very successful Back To The Roots world tour where former Accept singer Udo Dirkschneider played Accept songs for one last time, the diminutive but powerful singer has elected to continue touring under the name Dirkschneider while continuing to play songs from his former band’s catalogue.

The following message was posted on Dirkschneider‘s Facebook page back on March 17, 2017:

We want to let you know that we have decided to continue with DIRKSCHNEIDER!

Originally it was our plan to go back to touring with U.D.O. in 2017. But we have received an incredible number of emails and letters from fans begging us to continue with DIRKSCHNEIDER, and as there are still so many (Accept) songs left to be sung, we have decided to bow to your demands!

During the last tours with DIRKSCHNEIDER, the audience had a lot of fun, and we as a band also had the time of our lives on stage. In fact, a whole lot of people in countries all over the world have been knocked out by these shows. Just check out all the media (especially from the US, where we have just finished a 5 week tour) and you will read the caption „tour of the year“ multiple times……

We are thrilled by the idea of continuing and we are really looking forward to seeing you all again live on tour!

Oh, we nearly forgot to tell you about possibly the most important point of all: From Oct 2017 on, DIRKSCHNEIDER will tour with an almost completely NEW setlist. Of course, it will still contain only Accept hits, but this time with many different songs compared to the last tours.” 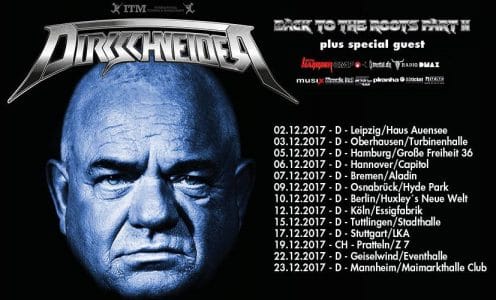 Sleaze Roxx stated the following in its concert review of Dirkschneider‘s tour stop in Toronto, Ontario, Canada back in early January 2017: “It’s hard to describe unless you’re there but the energy and enthusiasm from the crowd seemed off the charts for this show. It was also really cool to see some of the audience react when Dirkschneider would pull out an old little played Accept song from the past such as the gorgeous ballad “Winterdreams.” My favorite Accept songs that were played on this night were definitely “Up To The Limit,” “London Leatherboys” and “Midnight Mover.” Perhaps the oddest moment of the concert was the rather big mosh pit that surfaced when Dirkschneider launched into “Balls To The Wall” towards the end of the night. it was funny to see the faces of [guitarists Andrey] Smirnov and [Kasperi] Heikkinen who both looked surprised to see that mosh pit during the slower portions of “Balls To The Wall.”

I was not the only person to think that I had just seen a really special performance as it seemed that the words “concert of the year” were being thrown around by a multitude of people after the show and subsequently on Facebook. Have I already seen my concert of the year for 2017? I wouldn’t be surprised if that was the case. Whatever the case, I know that the bar has been set very high by Dirkschneider for any other concerts that I will be seeing in 2017.”